Underground heat from a supervolcano combined with high summer temperatures have melted a section of asphalt road in Yellowstone National Park, forcing the closure of some areas.

The 3.3-mile-long Firehole Lake Drive was closed on Monday after the park’s ever-changing thermal geology created a ‘hot spot’ which turned the road into ‘oatmeal’.

As they examined possible fixes, park officials warned hikers to avoid the area as the danger of stepping through solid-looking soil into boiling-hot water was high. 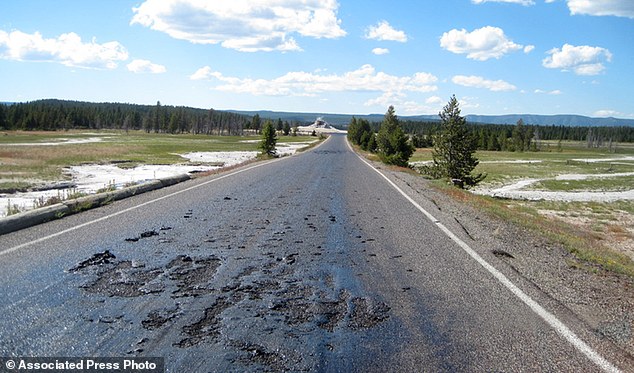 Thermal changes: Officials have closed Firehole Lake Drive and access to some geysers and thermal features in Yellowstone National Park after extreme heat caused the road to melt (pictured)

Copy link to paste in your messag

‘There are plenty of other great places to see thermal features in the park,’ Yellowstone spokesman Al Nash said. ‘I wouldn’t risk personal injury to see these during this temporary closure.’

The melted road is off Grand Loop Road between Old Faithful and Madison Junction in the park’s Lower Geyser Basin, which takes visitors past Great Fountain Geyser, White Dome Geyser and Firehole Lake. Access to these areas has been closed.

The same heat that feeds the geysers softened the pavement too much to drive on.

However, the damage to Firehole Lake Drive is unusually severe and could take several days to fix.

Unusually warm weather for Yellowstone — with high temperatures in the mid-80s — has contributed to turning the road into a hot, sticky mess.

‘We’ve got some ideas. We’re going to try them. Our maintenance staff has really looked at the issue,’ Nash said.