Year Of The Pepper! Or The Pooper… >> 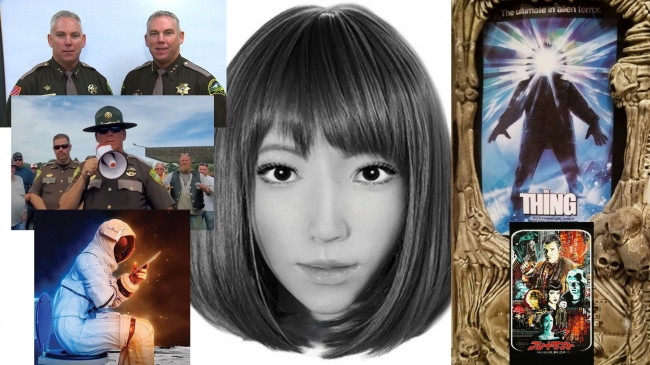 Zack said it. I liked it. Then we talked about space crap. Literally. Bam: Show title! We bounced around a bit but touched on lots of goodies today.

–Most importantly, The Alan Holman shared his amazing cancer cure book with our friend Terpenes1978 (sending LOTS of love!!!) and I have the link for your copy below!
–June 25, 1982. The Thing. Bladerunner. Amazing movies. Both fighting in theaters against a little wrinkled raisin of an ET, losing with critics and box office alike way back then, both are rightfully hailed as masterpieces these days. Ah, we miss you, Practical FX.

— Japanese scientists Hiroshi Ishiguro and Kohei Ogawa, have created Erica, an AI-driven robotic actress ( to star in a new $70million stinker) in real life as part of their study of robotics, also teaching her to act, applying the principles of method acting to artificial intelligence…because new movies don’t suck enough yet, apparently…

–Sheriff Robert Snaza, a Republican from Lewis County, and a twin(?), said people should break the coronavirus safety order during a speech in a church parking lot Tuesday, according to footage posted by a Daily Chronicle photographer.

“In case you guys didn’t hear, Gov. Inslee in his infinite wisdom has decided after over a hundred and some odd days that we should all wear face masks — inside and out,” Snaza declared into a bullhorn while wearing a police uniform and no face cover.”

–We end with a call from our friend on the road again, Travis “The Plane Truth”