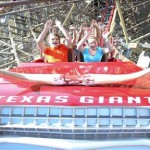 I’ve always been a thrill seeker ever since I can remember. My parents would drop me and 3 other friends off at Six Flags almost every other day during the summer. As I got older I began seeking out more intense experiences like skydiving and bungee jumping thanks to the coincidence that I happened to move near one of the only bungee jump locations in Texas. That is why it always saddens me when I hear about tragic deaths at amusement parks.

A woman who died while riding a 14-story roller coaster at Six Flags amusement park in North Texas apparently fell from the ride, police said.

Park spokeswoman Sharon Parker confirmed that a woman died while riding the Texas Giant roller coaster — dubbed the tallest steel-hybrid coaster in the world — but did not give specifics of what happened.

“We are committed to determining the cause of this tragic accident and will utilize every resource throughout this process,” Parker said in a statement Saturday. “It would be a disservice to the family to speculate regarding what transpired.”

According to witnesses the woman fell from the ride as the car was taking the first drop which is “the steepest drop out of any wooden roller-coaster”. I’ve personally been on this ride dozens of times in my life and I’m still nostalgic about wooden roller coasters, maybe due to an evening at Coney Island with my twin flame in a past life. However in this lifetime I definitely prefer the smooth ride of a steel roller coaster.

Statistically speaking, the odds of dying while on a roller coaster are 300 million to 1. Compare this to some of the other dangers we face on a daily basis and you’ll see why this event (as tragic as it is) is almost impossible to happen to you.

Being killed by a terrorist: 20 million to 1

Being killed by a police officer: 2.5 million to 1

The Texas Giant is an extremely intense ride throwing riders in every direction and mastering the art of positive and negative g-forces on a wooden roller coaster. A positive g-forces is the feeling you get when you’re going through a sharp turn or speeding up an incline while the rider experiences gravity pushing down on them. Negative g-forces is when the rider experiences  a sense of weightlessness while barreling down a steep bank or a sudden arch in the track. The Texas Giant has one section at the end that does it all and it’s so intense that the height requirement is actually taller for riders in the last car because the wheels actually lift up off of the track during parts of the ride. It’s very difficult for even the most seasoned rider to do anything but hold on for dear life due to the intense thrashing and banging of any wooden coaster design, especially one such as the Texas Giant.

It’s important to understand the mechanics of any roller coaster and why you are safe during the experience. First, most coasters have a safety harness that is manually connected to the lap bar or shoulder strap as a back up in case something goes wrong. However it is almost impossible for the safety bar to come unhinged during the ride. The train station (loading dock) has a special set of tracks with the ability to unlock the safety bars of all of the riders. These are special hooks inside of the track that trigger the release. However if the train is on any other part of the track, these hooks or “keys” are not present so the only way to unhinge the safety bar is with a special key that is inserted into the side of the car and twisted by a 6 ft pole. The only other way for a safety bar to come unhinged is if the piece of metal locking the safety bar breaks off, which is almost impossible. Almost.

Six Flags is unfortunately known for their lack of diligence when hiring and training their staff and this isn’t the first time this has happened. In 2005 Astroworld in Houston, TX shut down and some rides were demolished and other moved to other parks. Amongst those moved to other parks was a free-fall ride called the Dungeon Drop. I remember riding the ride on opening day.After Astroworld was demolished due to a terrible business decision that netted the almost bankrupt Six Flags $57 million after the $20 million demolishing costs, the Dungeon Drop was moved to Six Flags Kentucky under the name Superman Tower of Power.

Many Houston residence stopped going to the well established theme park because of maintenance issues and poor upkeep. I remember making my fair well visit to Astroworld before it’s closure in 2005 and contrasting the experience to my early pre-teen and teenage years and it was a night and day difference. The rides felt unstable, the park was filthy, there was gum everywhere and no one seemed to care about anything. So it doesn’t surprise me to hear about what happened shortly after.

In 2007, a 13 year old girl was riding the newly reconstructed ride and a cable snapped, wrapped around and amputating her leg. The park settled for $1.2 million. After investigation it was determined that the cables were not replaced after the rides reconstruction and the instruction manual (written in German) was never translated to English. Negligence such as this just as non-nonsensical as tearing down an established theme park like Astroworld that grossed $80 million per year in exchange for a $57 million payout. I’m no roller coaster engineer but even I have the common sense to know to replace every nut, bolt and cable when moving a ride to a new location. It is unfortunate but careless oversights like this take the odds of dying on a roller coaster from 1 billion to 1 to 300 million to 1.

In comes government regulation, but in the wrong place.

I’ve always preferred the smooth ride of steel roller coasters although wooden coasters still hold a bit of nostalgic value for me (maybe due to an evening spent at Coney Island with my twin flame in a past life). However, when an unfortunate situation like this befalls us the “law-makers” take the opportunity to once again dictate our lives and legislate what we can and cannot enjoy. I’ve seen this more than once in my lifetime.

When I was about 12 years old, I encountered the most intimidating coaster I’ve ever seen in my life called The Texas Tornado, in Houston, TX. The ride featured at least FIVE loops, broke speeds of 70 mph and reached g-forces in excess of 6.5. I had the pleasure of riding the Texas Tornado on two occasions but unfortunately the ride didn’t operate for more than a few days. Formerly a traveling roller coaster in Germany, lawmakers in Texas first forced Six Flags to alter the safety bars (originally just a lap bar) to include shoulder straps, then finally pushed to limit g-forces produced by roller coasters in Texas to a mere 4. Although unsuccessful in passing the legislation, Six Flags voluntarily moved the Texas Tornado out of Texas to another park under the name Zonga.

Next to the Texas Giant at Six Flags over Texas stands another controversial ride called the Titan. The Titan has come under some scrutiny because of the second helix which pushes g-forces to 4.5 prompting Six Flags to implement a braking system to reduce the experience. I have to admit that I miss living in Texas because once you experience ride like this, the rides at Elitch Gardens in Denver really pale in comparison.

One of the other most intense experiences I’ve ever had was at Epcot Center on a ride called Mission Space. Mission Space is a true state of the art astronaut training simulation that takes the rider on a mission to Mars and allows the rider to experience the positive and negative g-forces of space flight. When the ride opened (and I was lucky enough to ride it), it reached g-forces in excess of 6. It was the most intense ride I experienced since the Texas Tornado and even a seasoned coaster enthusiast like myself walked out dizzy and feeling beat up. However after a 4 year old died on the ride (due to pre-existing medical conditions), the ride was reduced to g -forces of 2.5.

Despite the recent incident at Six Flags Over Texas having nothing to do with the g-force controversy, it’s reasonable to assume that law-makers in Texas will once again push for g-force regulation and dictate to you what you can and can’t experience, which is all part of the ever growing nanny-state. After all, “the president and first lady are like the mom and dad of the country” right?