Wildfires in California still out of control 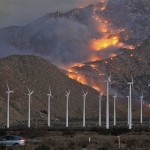 Pasadena–  16,000 acres have been destroyed as thousands evacuate Cabazan and the surrounding areas. 26 homes have been destroyed according to the Riverside County Fire Department. Cal Fire said evacuation orders had been issued for the communities of Black Mountain, Vista Grande, Mount Edna, Poppet Flats, Twin Pines and Silent Valley, along with Snow Creek village and parts of Cabazon. Once again, our thoughts and prayers to the people of California.

In the past few years we have seen out of control blazes throughout the United States including Texas, Arizona and multiple fires in Colorado. Other parts of the country like Minnesota and the East Coast have experienced mass flooding as well as tornadoes destroying many parts of Oklahoma. It seems like the last few years have been riddled with natural disasters all over the world, many situations that the US mainstream media fails to report such as massive earthquakes in Europe, flooding in India and much more. It’s apparent that mother earth is going through major changes. The symptoms are clear, the cause is the question.