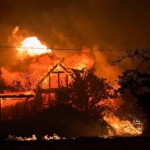 Something strange is happening with the earth and it’s to a point where it’s become undeniable. Strange weather events have plagued the United States for the last few years with dozens of hurricanes, tornadoes, massive floods and wildfire. As we (in Colorado) are still dealing with the wildfires that took out parts of Colorado Springs (coincidentally the same regent was hit at the exact same time last year by an uncontrollable wildfire), Arizona is feeling it too. We can speculate about the cause of these fires: arson, dry heat induced or possibly fiery meteorites falling from the sky. But unfortunately people continue to lose their possessions, homes and lives. The official report states that lighting caused the blaze on Friday evening.

Today, Flagstaff, Arizona experienced the “worst firefighter loss” since 1939 after the firefighters went missing in the blaze and later determined to be deceased. The firefighters belonged to an “elite group of fire fighters” known as the “Granite Mountain Interagency Hotshot Crew”.

“This is as dark a day as I can remember,” Arizona Gov. Jan Brewer said in a statement. “It may be days or longer before an investigation reveals how this tragedy occurred, but the essence we already know in our hearts: fighting fires is dangerous work.””

He said all of the firefighters had deployed their fire shelters – an emergency measure when there is no escape.

Skurja confirmed that 19 members of the 20-person crew had died. One survivor was hospitalized with injuries, he said, but he did not know the firefighter’s condition.

“The fire was very aggressive. It just overtook them,” Skurja said.

Roxie Glover, a spokeswoman for Wickenburg Community Hospital, said officials had told her to expect injured firefighters. Then the grim news arrived.

“It became clear that the firefighters had been deceased,” Glover said. “We were told that we were not getting firefighters.”

Our thoughts, prayers and condolences go out to the families.