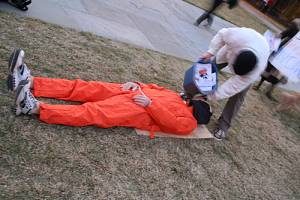 No, none of the Senate’s 6,000-page report on torture and brutal interrogation techniques performed by the CIA during the War on Terror has been declassified yet. But we know how the White House is going to respond and what kind of questions they think the media is going to ask because somebody accidentally (or perhaps “accidentally”) leaked a four-page memo to an Associated Press reporter.

Because the memo is designed to help the White House prepare for what it sees as the likely big questions, it essentially allows the reader to extrapolate the major points that are going to be coming out of the report, and that’s exactly what the Associated Press did. At this point, much of the most important findings of the full report barely counts as a secret. Anybody who has read any stories about the Senate’s preparation of this report (and their fight with the CIA over it) knows that the Senate has concluded that torture (regardless of whether the exact word is used) of detainees took place and that it didn’t help the United States fight terrorism.

But what is new is that apparently then-Secretary of State Colin Powell and some U.S. ambassadors were kept in the dark about the CIA’s actions, and some ambassadors who knew about the interrogations at overseas black sites were told not to inform their superiors at the State Department.

The memo is just one page of talking points and three pages of predictions on the type of questions they think media will ask. The White House seems to think the media is going to ask a lot of questions about why the release of the report is even happening: “Isn’t the release of this report endangering American citizens overseas?”; “Did the White House ask Chairman Feinstein to delay release of the report? Why not?”; “Is the Administration further undermining our moral authority?”; “Isn’t the release of this report going to destroy our intelligence relationships?” (Answer: Too late); and the hilarious “Isn’t this the worst possible time to release this report in terms of unrest in the Middle East and other places where our people are at risk?” Yes, let’s fix all that first! To be fair, though, they do also predict questions about whether the government is admitting that torture actually happened and whether the Department of Justice will revisit the decision not to prosecute anybody.

The talking points themselves are of the predictable “Mistakes were made” and “We don’t do this anymore” variety. Possibly the most amusingly cynical talking point, which the Associated Press noticed and decided to include in their story, is this one:

“This report tells a story of which no American is proud. But it is also part of another story of which we can be proud. America’s democratic system worked just as it was designed to work in bringing an end to actions inconsistent with our democratic values.”

Yeah, our treatment of prisoners was terrible, absolutely reprehensible. But the outrage helped certain people get elected! To be fair, it probably helped save us from a President Rudy Giuliani.