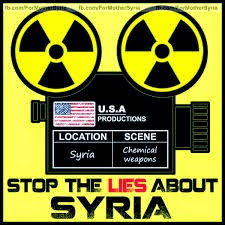 In what is now the latest of chemical weapons attacks to have taken place inside Syria and blamed on the Syrian government by the Western media, the recent chlorine-based gas attack in Kfar Zeita has prompted the Anglo-European propaganda machine to once again begin greasing up its gears to accuse Bashar al-Assad of crimes against humanity and justify some form of humanitarian intervention in Syria by NATO forces.

The attacks come shortly before the completion of the transfer and destruction of Syria’s chemical weapons stockpile.

Predictably, the recent attacks are being promoted by Western outlets as an example of how a chemical weapons free Syria is still capable of deploying chemical weapons against civilians due to a loophole allowing for the production of chlorine gas.
State Department spokeswoman Jen Psaki has already seized upon the reports, having stated “We have indications of the use of a toxic industrial chemical — probably chlorine — in Syria this month in the opposition-dominated village of Kfar Zeita … We’re examining allegations that the government was responsible. We take all allegations of the use of chemicals in combat use very seriously.”

However, what is being completely ignored by these outlets is both the possibility and high probability that the Syrian government was not responsible for the chlorine gas attacks to being with.

Indeed, there are several reasons to doubt the claims made by Western governments and Western media outlets, aside from the fact that both of these institutions have lied on repeated occasions regarding the use of chemical weapons in Syria.

First, after Syria’s near miss with the chemical weapons controversy in Ghouta, it would be absolutely foolish for the Syrian government to launch a chemical weapons attack against civilians. Having avoided the catastrophe of a Western invasion in August only due to a deal brokered by the Russians at the very last minute, the Assad government is not likely to be so incompetent as to put itself in the same position. (Note: The Assad government had not put itself in this position the first time, since it was the death squads who were responsible for the chemical weapons attacks.)

Second, although corporate media outlets such as TIME and ABC confidently report that Assad is the most likely culprit in terms of the Kafr Zeita gas attacks, the fact is that there is no evidence for these claims whatsoever.

In fact, the entirety of the evidence cited by these mainstream outlets revolve around information provided by pro-death squad NGOs or by the death squad operatives themselves. Clearly, these sources are hardly impartial observers.

Nevertheless, death squad forces uploaded a series of videos to YouTube that included footage of civilians suffering from what appears to be the inhalation of toxic gas as well as one young boy who has allegedly died from the chemicals. None of this footage, however, shows anything incriminating to the Assad government.

Perhaps the most important fact surrounding the recent chemical attack is that the death squads operating in Syria have a history of using not only chemical weapons in general but chlorine gas specifically.

In March, 2013, after Khan al-Assal was attacked by the death squads using what appeared to be chlorine gas, it was reported by Alex Thomson of The Telegraph that the likelihood of the chemicals having been used by the Syrian government was quite low. Instead, it was the death squads (aka “rebels”) who were heavily implicated in the attack. Thomson wrote,

The Syrian military is said to believe that a home-made locally-manufactured rocket was fired, containing a form of chlorine known as CL17, easily available as a swimming pool cleaner. They claim that the warhead contained a quantity of the gas, dissolved in saline solution.

CL17 is normal chlorine for swimming pools or industrial purposes. It is rated as Level 2 under the chemical weapons convention, which means it is dual purpose – it can be used as a weapon as well as for industrial or domestic purposes. Level 1 agents are chemicals whose sole use is as weapons, such as the nerve agents sarin or tabun.

There has been extensive experimentation by insurgents in Iraq in the use of chlorine, which is harmful when mixed with water to form hydrochloric acid. It vapourises quickly, meaning that in a big explosion it will evaporate; in a small blast – for instance, one delivered by a home-made rocket – it will turn into airborne droplets before dispersing quickly.

So it is likely only to produce limited casualties. In this case there were only 26 fatalities, far fewer than would be expected from a full chemical weapon attack. In short, it is easily improvised into a chemical device but not one that would be used by an army seeking mass-casualty effects. [emphasis added]

Back in December of 2012, after the death squads managed to capture a chlorine factory inside Syria, the Syrian government actually issued a warning that the death squads might attempt to use chemical weapons of this nature in their battle to overthrow and oppress the government and people of Syria respectively. The Syrian Foreign Ministry stated, “Terrorist groups may resort to using chemical weapons against the Syrian people … after having gained control of a toxic chlorine factory.”

In the end, the latest chemical weapons attack will be cast in such a light by Western media outlets as to suggest that the Assad government is the most plausible suspect. Like all of the other chemical weapons attacks before it, the Kafr Zeita attacks will be used in order to justify some type of military adventure by NATO in Syria.

One can only hope that the American people have grown immune to such propaganda as the tired line of “chemical weapons attacks” and crimes against humanity has been repeated so many times in the past, only to find shortly thereafter that it was the so-called “rebels” who were responsible.

What is plain to see, however, is that, no matter how bumpy the road may get, the Anglo-European powers have no plans to stray from the Path to Persia.

Brandon Turbeville is an author out of Florence, South Carolina. He has a Bachelor’s Degree from Francis Marion University and is the author of six books, Codex Alimentarius — The End of Health Freedom, 7 Real Conspiracies, Five Sense Solutions and Dispatches From a Dissident, volume 1 and volume 2, and The Road to Damascus: The Anglo-American Assault on Syria. Turbeville has published over 300 articles dealing on a wide variety of subjects including health, economics, government corruption, and civil liberties. Brandon Turbeville’s podcast Truth on The Tracks can be found every Monday night 9 pm EST at UCYTV.  He is available for radio and TV interviews. Please contact activistpost (at) gmail.com.

The Pain of Online Psychic Reading

1. To examine safety attributes, double-click on the icon. A $1 per minute psychic reading using AskNow. In regard to, interaction with specific services accessible on PsychicSource.com, a few written communications, like the messages from advisors in your account may be monitored by Psychic Source. AskNow is a good resource for quality, cheap telephone psychic...

Wondering exactly how to play Gameboy development games in full HD on your computer? Well, that’& rsquo; s where emulators are available in. There are a great deal of emulators offered online, however, you require to be very mindful regarding the source, obtain one from a trusted and preferred supplier. You could not obtain the...

Wondering exactly how to play Gameboy development games in full HD on your computer? Well, that’ s where emulators are available in. There are a great deal of emulators offered online, however, you require to be very mindful regarding the source, obtain one from a trusted and preferred supplier. You could not obtain the very...