We’re All Going to be Genetically-Altered Lab Rats for Freedom. Soon! NOW!

Headline: Monsanto Excited to Destroy Africa (as they have India and the United States). Crowds Cheer!

Degrees of Joy and Sorrow…

Bono Vox, once Paul Hewson, lead iPod salesman from the U2 Corporation, International, wants YOU to help HIM put Monsanto in charge of…Africa! Which part? All of it, I think.

Yes, our Bono, once a skilled and high-flying poet/singer in the field of “the end of rock and roll,” now (again) reveals he is as potently brain-dead a political shill as he was a emotional cypher for lost generations. (Potent in two genres – very gifted, he).

It seems to stand against reason that an Irish Catholic/Protestant freedom-fighter, who spent the first decade of his career singing songs (apparently) for the downtrodden in the ‘Let’s-Kill-Each-Other-To-Death-For-Jesus’ Christian wars of his famished country, would have then spent the majority of two decades struggling for the rights of those poor, down-trodden international pharma drug corporations to put Nevirapine (what?) into the bodies of pregnant African women.

Yes, that’s right. AIDS drugs kill people. I know! Shocking. Hey. You gotta lose your mental virginity sometime. They lied to  you, Princess. They lied to us all….

But, perhaps it’s not so surprising. After all, he is Irish (read “guilt-sex-shame”), divided between Protestantism and Catholicism, bedecked in the purple and scarlet trappings of the late Roman Empire and its church here on Earth (with branches in Rome and at the National Institutes of Health). Should we be surprised that he was so easily convinced that Africans died because they had sex?

Those of us who eventually read beyond the headlines and iPod commercials came to understand that what the AIDS cabal was practicing was really an old saw called “eugenics.” IE; “Stop the black man from breeding, kill the poor – it’ll be better for everyone!” – Malthus, Darwin, Churchill, Fauci.

And so Bono saw it with his own eyeglasses: “Yes, they’re starving! Let’s Blame SEX!” 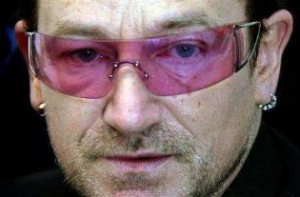 – those Africans are hungry. Drug ‘em! FOR LOVE AND PEACE!

And now that he’s gotten that out of his system, it’s onto food. Why should anyone be able to eat food that grows, when the Irish had to starve? Good and fair question. The answer is: We shouldn’t! We’re going to all be genetically-altered lab rats for freedom. Soon! NOW!

“At the G8 Summit held two weeks ago at Camp David, President Obama met with private industry and African heads of state to launch the New Alliance for Food Security and Nutrition, a euphemism for monocultured, genetically modified crops and toxic agrochemicals aimed at making poor farmers debt slaves to corporations, while destroying the ecosphere for profit. And Bono, of the rock group U2, is out shilling for Monsanto on this one.” – Activist Post

And our Bono-bo? He’s taking the lead from Barry Obama, whose strings are pulled (and power granted) by Cargill and Monsanto, Dupont, Pepsi, Syngenta and the rest of the heroes of the, ahem, ‘green revolution.’

“It’s phase 2 of the Green Revolution. Tanzania, Ghana, and Ethiopia are the first to fall for the deception, with Mozambique, Cote d’Ivoire, Burkina Faso and other African nations lining up for the “Grow Africa Partnership,” under Obama’s “Global Agricultural Development” plan.”

But the Green Revolution is a beautiful inversion, like “intelligence agency” and “corporate freedom.” It really means: “The Dead Soil Plot:”

“[T]he Green Revolution was a scam to use cheap fossil fuels to increase monocrop yield, drive tens of millions off the land, and use the stolen land and food to render food temporarily artificially cheap for Western consumerism.“

“”The soil is stripped of all nutrition and zombified by ever-increasing applications of synthetic fertilizer. Monoculture is ever more dependent on the increasing application of ever more toxic herbicides and pesticides. Deployment of GMOs escalates these vulnerabilities. Factory farms can exist only with ever increasing use of antibiotics. All these systems are extremely tenuous, vulnerable, not robust, not resilient. They’re all guaranteed to collapse. Hermetic monoculture, and industrial agriculture as such, is one big hothouse flower which requires perfect conditions to survive….” – Activist Post

Get it? We’re all going to die in a famine! YAY! That’ll solve the overpopulation problem…

Why in a famine? Because…do I have to explain it? Okay. You know, when the weeds mutate, the strains mal-adjust to the tinkered germline, the hostile bacteria overwhelm the weakened and altered genotype; and the bore worms and fungi find a new weakness introduced by our Ph.D. candidate lab-techs, working diligently on destroying the world, PCR by PCR…

And when the worldwide crop die-off happens… it’s gonna be very Aztec, all of a sudden. Aztec? Well, sure, you remember. From the movie? That’s when people maybe were chronically protein deficient and… uhm…) Wow, you know what people taste like?? 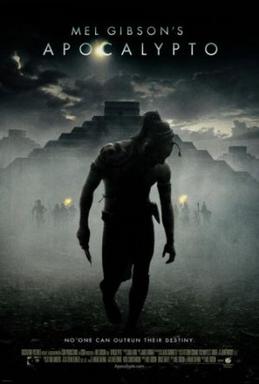 “Through cannibalism, the Aztecs appear to have been attempting to reduce very particular nutritional deficiencies. Under the conditions of high population pressure and class stratification that characterized the Aztec state, commoners or lower-class persons rarely had the opportunity to eat any game, even the domesticated turkey, except on great occasions.

They often had to content themselves with such creatures as worms and snakes and an edible lake-surface scum called “stone dung,” which may have been algae fostered by pollution from Tenochtitlán.

Preliminary research seems to indicate that although fish and waterfowl were taken from the lakes, most of the Aztec poor did not have significant access to this protein source and were forced to be near-vegetarians, subsisting mainly on domesticated plant foods such a maize and beans.” LINK

We taste like pork, or, so say the head-hunters, new and old.

But we’ll at least be able to get our Soylent Green at a big box store – that’ll save us some pesos!!

Have fun at Wal*Mart! I hear they’re opening a new one everyday! In AFRICA!

Hey, you can use your Project Red credit card! You’ll earn triple Soylent points on every killing…

Liam Scheff is author of “Official Stories,” drilling to the core of the gooey religious center of science.