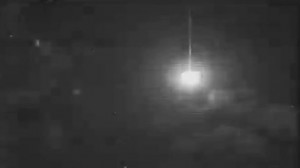 Star-gazers in Tennessee, Alabama and Mississippi witnessed a bright fireball light up the sky last week. The Capricornid meteor was traveling at 54,000 miles per hour, according to NASA’s Marshall Space Flight Center. A video captured by NASA shows the meteor streaking across the sky on August 1 around 12:00 a.m. before exploding 47 miles above Taft, Tennessee. The Alpha Capricornids meteor shower takes place between 15 July and 10 August.