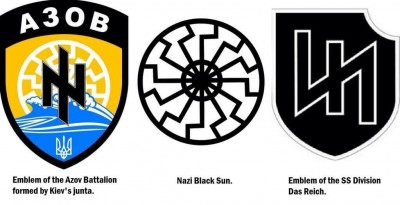 Image: Nazi emblems of the Azov brigade of the Ukraine National Guard which operates under the auspices of the Ministry of Interior

We bring to the attention of Global Research Readers a video on the atrocities committed in Eastern Ukraine including the indiscriminate killing of unarmed civilians. This video was put together by the communities in Eastern Ukraine which are the object of  the attacks.

The mainstream media is silent on the issue. These videos are the object of censorship.

As described in the video,  Ukraine’s National Guard which is supported and financed by the West is controlled by Neo-Nazis with Nazi emblems.

In the media’s coverage of unfolding atrocities directed against civilians in Eastern Ukraine, the words Nazi, Fascist or Neo-Nazi are a taboo. They have been eliminated from the anthology of investigative reporting.

Spread the word far and wide. In solidarity with the people of  Eastern Ukraine.

Mainstream media channels won’t show you any of this footage. This is a war they don’t want you to see.

Kiev’s warmongers and fascists on the ground keep on killing innocent civilians.

90% of the footage shown here was filmed by the locals and is readily available on YouTube. The blood that’s being spilled over by the Kiev regime will never be washed away.

The Ukrainian mainstream media immediately blamed the incident on the rebels who don’t even have an aircraft.

On the 3rd of July, a deputy commander of the Public Relations of the Azov Battalion admitted that the cause of fire was pilot “error”.

All of the war crimes committed by Ukrainian government and their punitive battalions are blamed on the rebels.

The rebels wouldn’t kill their own parents, wives, and children since over 90% of the rebels are made up of local citizens.

Ukrainian propaganda machine is really on it. Disgusting.