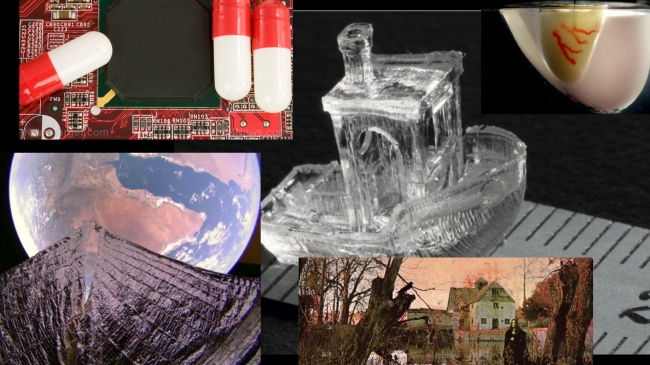 No, not goats…though most kids ARE the greatest of all time. When did it happen? It was a slow, subtle process, insidiously sneaking into our psyche through safety recalls kid-proofing cereal prizes, designated child-safe areas creating the illusion that OTHER areas are…well, that very thing: other. And what’s more frightening than THAT?? But, otherness is what we need more of in this carbon-copied cacophony we call Civilization. Let the children be children, messy, loud, alive!! Go, Buffy!
–Need a good laugh? Look at the pic above, mainly that funny ball thingie! They are trying to tell us that’s the Earth!! Wha happened?? Ocean much?? Thanx, Lightsail2!!
–Researchers find a way to 3D print whole objects in seconds. Like the tiny boat in the pic. Also, a group of scientists at Harvard’s Wyss Institute have now developed a solution that will 3D print blood vessels on living tissues. Their paper, published today in Science Advances, explains how a new technique called the SWIFT method (Sacrificial Writing Into Functional Tissue), will enable the creation of larger, more effective organs. Sacrificial. Sacri. Ficial. K.
–Curcumin, a polyphenol in turmeric, can selectively target cancer stem cells. Used for thousands of years in ancient Chinese and Ayurvedic medicine, turmeric – thanks to powerful compounds known as curcuminoids – has powerful antioxidant and anti-inflammatory powers. Over 240 studies have also confirmed that curcumin in turmeric boosts brainpower and lowers the risk of brain diseases; reduces the risk of heart disease; prevents and possibly even helps to treat Alzheimer’s disease; reduces arthritis symptoms; helps ward off depression, and fights the effects of aging. Miracle food, indeed!
–Big Pharma’s dream come true: Electronic smart pills contain computer chips that track your compliance. Smart drugs? We need smart people!!
–For the longest time, the identity of the woman on the cover of the front of Black Sabbath’s self-titled debut album — which turns 50 today — had been unknown. Now, the “black figure” has finally been revealed to be Louisa Livingstone, and she makes electronic music at age 68 as the band Indebra.