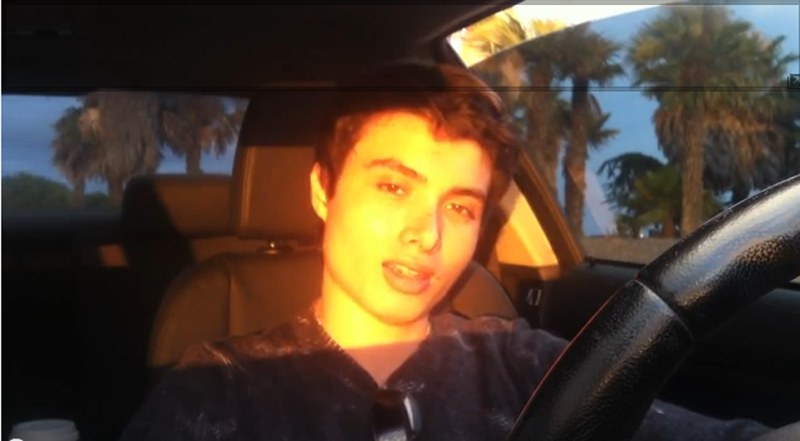 “The sheriff’s office has obtained and is currently analyzing written and video evidence that suggests this was a premeditated mass murder,” Hoover said.

The shooter is believed to be Elliot Rodger (son of famous Hollywood director Peter Rodger, who helped direct the film “The Hunger Games”), who detailed his intentions on Youtube prior to the events taking place. In the following video, Elliot Rodger makes several chilling statements about being rejected his entire life by women.

“Ever since I’ve hit  puberty I’ve been forced to endure an existence of loneliness, rejection and unfulfilled desires. All because girls have never been attracted to me. Girls gave their affection and love and sex to other men but never to me. I’m 22 years old and I’m still a virgin. I’ve never even kissed a girl. I’ve been through college for two and a half years and I’m still a virgin”

In the video, Elliot Rodger states that he will walk into the most popular sorority on campus and murder several of the students. He goes on to say that afterwards, he will drive around campus shooting all of the “blonde sluts” he finds. Most of the videos on his channel are filmed in a BMW which matches up with statements made by the Santa Barbara Sheriff’s office and eyewitness testimony that the shooter was in a BMW. The first video, posted February 10, 2014, begins with a shot of the BMW steering wheel and pans up to a sunset in Santa Barbara. However, the video does not show his face.

The next video posted on March 28, 2014 shows a view of a landing in Los Angeles where Elliot Rodger appears to be flying in a private jet.  More videos appear, including one documenting his “morning drive to school” and other similar videos. The videos start with a shot of the BMW steering wheel. However none of the videos actually show Elliot Rodger. Elliot Rodger makes his first appearance in a video titled “I’m Awesome” dated on May 20, 2014.

Three days later on May 23, 2014, things get strange. In a video titled “Why do girls hate me so much?” Elliot Rodgers details his plight  with the female gender, asking the camera why girls hate him so much. He states that he dresses nice to appeal to them but girls are still repulsed by him. He posts six more videos along similar lines in a 24-hour period until finally, he states his intentions.

The video titled “Retribution” appears have been filmed at sunrise or sunset – presumably the day of or the day before the shooting. It is difficult to determine the actual time of the recording but there are a few hints. The duration of the video is 6 minutes and 55 seconds, during which time the sky in the background appears to become brighter. There is also what appears to be a cup of coffee in the background – therefore it’s probable that the video was shot during sunrise. According to Youtube, the video was posted “10 hours ago” at 8:30am Pacific. Therefore it is presumed that the video was uploaded between 11:00pm and midnight Pacific on May 23, 2014.

As always, anomalies begin to emerge when analyzing this campus shooting and the evidence presented – and we must examine every situation from a 360° angle. While it’s too early to draw any definitive conclusions, the possibility of a staged event is always on the table. In 100% of previous “shootings”, the shooter’s Facebook pages, Youtube channels and other social media profiles are removed immediately. Elliot Rodger’s Youtube channel remained online until approximately 9:30am on May 24, 2014, several hours after the media began circulating this story.

When examining Elliot Rodger himself, he doesn’t appear to be a bad-looking individual. He is a fit young man, has a defined chin and is generally well-groomed. I don’t know what women consider “attractive” these days, but Elliot Rodger does not strike me as someone who is not attractive. Judging from the previous videos showing himself flying in a private jet, and the fact that he appears to drive a newer BMW, one would imagine that he grew up in a family with money. This begs the question: In 2014 and in a world of ultra-materialism, shallow minds and Miley Cyrus, are we to believe that there is not one gold digging girl in the state of California who would date a rich 22 year old, who flew on private jets and drove a BMW? (Not to mention a father with big Hollywood connections could be extremely profitable for an up-and-coming actress trying to make a name for herself?) Unless this individual had such an extremely psychotic personality that it drove women away,  one would imagine that some girl somewhere would date him at some point.

Another interesting fact to note is that the “depressed” and “psychotic” videos were all uploaded within a 12-hour period on May 23, 2014, the day of the shooting.  However, in the video titled ‘Why Do Girls Hate Me So Much?’ Elliot Rodger appears to be a bit younger than he does in the video titled ‘Retribution’. This anomaly is explained away in the video description.  Is this another red flag indicative of a staged event? Or merely a coincidence?

Girls have never seemed to have any interest in me, and I want to know why. I’m such a perfect, beautiful, fabulous guy. I should never have had any problems with girls, but I do, and I find that ridiculous.

This video is a reupload. I had to take the last one down because it gained too much negative attention. I’ll keep uploading it until I get at least one honest answer from an actual girl.

While more investigation is needed before drawing any firm conclusions, it is worthy to note these anomalies in every situation. We will keep you posted of new developments here at Truth Frequency Radio.

UPDATE: 4PM MDT: Second suspect taken into custody ; Witnesses heard more than one gun ; 8 separate locations with multiple shooting reports being called in at once

ABC News reported Brown as saying that he wasn’t sure if the suspect was shot by sheriff’s deputies when they exchanged gunfire, or if the suspect took his own life. Kelly Hoover, a spokesperson for the Santa Barbara County Sheriff’s Office, said a second suspect in the mass shooting was taken into custody following last night’s shooting spree.

The shooter has been identified, although police aren’t releasing that information. Police are reporting now that they believe he may have acted alone.

Mattera was sitting at a bonfire with friends when at least one gunshot whizzed overhead. The friends ran for cover when they heard the barrage of gunfire.

“We heard so many gunshots. It was unbelievable. I thought they were firecrackers. There had to have been at least like two guns. There were a lot of shots,” he said.

“There are eight separate locations,” Regan said, referring to spots where the shooter is believed to have fired.

…
The separate shooting scenes resulted in mass confusion, he said. Friends called friends to report activity at one location, only to learn of shootings at others, Jensen and others said.

“We had no idea what was going on at the time,” Jensen, from the San Francisco area, said.

…”We didn’t know what was going on,” he said. “Everyone said it was happening at a different place.”

Suspect was diagnosed with Asperger’s Syndrome, under psychiatric care and had a recent visit from unspecified law enforcement and social worker

Schifman said in recent weeks that Rodger’s parents were concerned for their son’s well being and reported his disturbing YouTube videos to police, which lead to an investigation. According to Schifman, police interviewed Rodger and found him to be “polite and kind.” He did not specify which law enforcement division conducted the interview.

Schifman said Rodger was diagnosed as being a high-functioning patient with Asperger syndrome and had trouble making friends.

The Sheriff’s office has not officially named the suspect. The attorney for Peter Rodger, Alan Shifman, confirmed by phone to THR that the family had contacted police several weeks prior to the shooting. Shifman also confirmed reports that Elliot Rodger, a student at Santa Barbara city college, had been seeing a social worker and therapists recently.

The Associated Press earlier quoted Shifman saying that police were contacted after YouTube clips were uploaded “regarding suicide and the killing of people.”