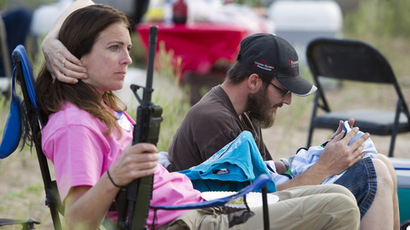 Utah’s residents have had a contentious history with the federal government when it comes to public lands. Now one county in the state has taken things a step further, passing a resolution refusing to recognize federal agents.

Carbon County, located on the eastern side of Utah and named for the coal deposits in the region, unanimously passed the resolution against federal agents on June 4. The county board of commissioners specially singled out officials from the Bureau of Land Management in its prohibition.

“Any such attempted exercise of law enforcement powers by an official of a land management agency IS NOT RECOGNIZED by Carbon County,” the resolution stated (caps in original), “and shall be deemed AN IMMINENT THREAT TO THE HEALTH, SAFETY AND WELFARE OF THE CITIZENS OF CARBON COUNTY.”

The resolution also demanded that any federal agent intending to take a law enforcement action “shall first declare his presence and intended action to the Sheriff of Carbon County.”

The resolution is the second repudiation of federal authority in Utah since Nevada rancher Cliven Bundy (known as the “last rancher in Clark County, Nevada”) took a stand in a recent showdown against the BLM over his refusal since 1993 to pay fees to the federal government for the right to raise cattle on land his family has ranched since the 1870s. In May, residents of the town of Blanding were joined by Bundy supporters as they rode ATVs on BLM land that has been closed to motorized vehicles since 2007.

“People are hugely frustrated,” San Juan County Commissioner Bruce Adams said to the Deseret News of the ATV ride. “People are ready to draw a line in the sand, they’re ready to push back.”

Although some in Utah see the board of commissioners’ move as not the most logical one (“Carbon County now joins LaVerkin in the tinfoil hat world. LaVerkin, you might recall, once passed a resolution banning the U.N. from the southern Utah city,” Paul Rolly wrote in a Salt Lake Tribune op-ed), Utah’s frustrations with the federal government aren’t limited to Blanding and Carbon County.

“We as a state are heavily dependent on what you do in managing these lands. … It is very, very important we have a working relationship,” said Rep. Mike Noel, the chairman of the House’s Natural Resources, Agriculture and Environment Committee, according to the Tribune.

Noel represents seven rural counties, and said his constituents “have a very, very difficult time understanding some of the decisions that come down.”

Utah Lt. Gov. Spencer Cox said the BLM arbitrarily canceled its contracts with county sheriffs’ departments on the premise they were “illegal,” but Utah was the only state in which that action was taken.

Rep. Ken Ivory lambasted the BLM for an excessive display of force by federal agents at the Bundy ranch. “There were hundreds of agents armed heavily with Tasers and attack dogs going in to collect a fee or fine. We have not seen that before,” he said.

Even before Utah’s protests stemming from the Bundy standoff, residents of the Beehive State viewed the federal government with suspicion.

“It is fair to say that the vast majority of people here are frustrated with the federal presence here,” Bill Boyle, a lifelong resident and publisher of the San Juan Record newspaper told the Denver Post in 2011.

Back then, a federal raid by 150 armed agents took place against 16 Blanding residents, the Post reported. The raid focused on violations of the 1906 Antiquities Law and the 1979 Archeological Resources Protection Act for looting Ancestral Puebloan artifacts, the Department of Justice said at the time.

But Blanding’s citizens contended that the BLM was being hypocritical. According to the Post at the time, the BLM “has been known to smash pots and rock objects when there was no place to store them. And BLM and US Forest Service agents were implicated in one of the recent search-warrant affidavits for taking and selling items themselves.”

Federal raids also occurred in the area in the 1980s.

What You Should Have Asked Your Teachers About Optima Tax Relief

Quicken and QuickBooks import not accessible with TurboTax installed on a Mac. Ratings, certification and memberships. Obligations: Counselors are all Certified by the International Association of Professional Debt Arbitrators (IAPDA). Generally, fees for labor to fix residential or nonresidential property damaged in a declared disaster area are exempt from sales and use taxation. Imports from...