No less than 16 states  with underground cities, tunnels and “military” bases are located in areas that coincide with clusters of people vanishing from state and national parks, most of those areas rich in legends, aliens sightings, UFO hotspots and rumored to be alien/military facilities.

Also keep in mind that many believe these “aliens” are actually ancient beings still on Earth today that walk among us, the Nephilim, and/or The Fallen or Homo Capensis, as described by World Bank whistleblower Karen Hudes here and here.

Is there a connection?

That is a question a reader asked me to look into via an email after reading an article I wrote yesterday titled ” Alien NON-Disclosure Document Will Astound You – UPDATED: Full Letter Linked“,  and connecting it with a previous piece I wrote in January titled “People Vanishing In Clusters, Unexplained – What’s Happening?,” which I did and this article provides links, videos and information I found while doing this research.

Below is a map of the cluster disappearances: 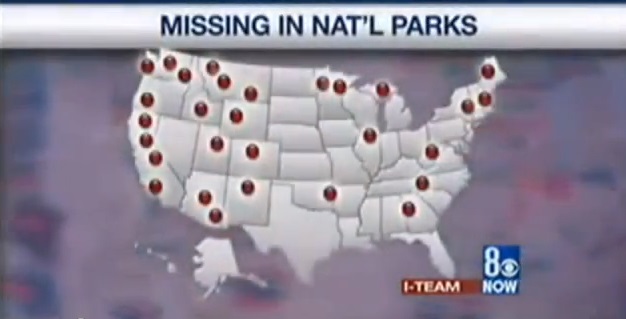 The states where military bases, and/or underground cities and tunnel systems coincidently match up with states where clusters of people have vanished are; AZ, CA, CO, GA, ID, IL, NM, OR, UT, WA and WV and the Arkansas/Oklahoma border area. Three more states where the “cluster” seems to be on state lines are SC, NC and TN. Then we have more, where the Appalachian Mountains run through multiple other states along the Eastern side of the US map.

I will ask readers to click the link provide HERE, (Scroll down to the section “United States Underground Cities, Bases and Tunnels Systems”) for more details than I am going to show below, but I will offer some samples of the accounts, legends and rumors for a number of these states as a sample of the stories about the areas underground where these clusters of people are still, to this day, vanishing.

For example, Arizona, which shows two separate clusters in the first map above:

GRAND CANYON – Cave[s] near the confluence of the Colorado and Little Colorado rivers. Hopi legends say that their ancestors once lived underground with a friendly race of “ant people” [not to be confused with the sinister “mantis” people described by several abductees], but some of their kind turned to sorcery and made an alliance with lizard or serpent men known as the “two hearts”, which dwelt in still deeper caverns below. The “flood” of evil and violence forced the peaceful Hopi’s to the surface world. An explorer named G. E. Kincaid claimed to have found “one of” the ancient caves, in which were reportedly discovered Oriental, Egyptian & Central American type artifacts.

Smithsonian archaeologists S. A. Jordan and associates also explored the man-made cavern with hundreds of rooms, enough to hold over 50 thousand people. The underground city is about 42 miles up river from El Tovar Crystal Canyon and Crystal Creek, and about 2000 feet above the river bed on the east wall. John Rhodes after 3 years of field research reportedly discovered the Grand Canyon city, which is now being used as a museum for elitist groups and has lower levels that are being used by “super secret black book operatives”, which can only be entered via a stainless steel door at the bottom of a stairwell deep within the “city” that is “guarded by a very lonely soldier staring into the darkness… dressed in a white jumpsuit and armed only with an M16 assault rifle to ward off his imagination.”

SEDONA – Famous for it’s massive vortexes, is claimed to be an ancient colony of the Lemurians. According to Commander X, there are reports of a joint-operational underground city and facility under the Enchantment Resort in Boyton Canyon, where clone-like men in black have been seen, along with unusual electromagnetic vortex phenomena.

Next the Arkansas area:

CUSHMAN – Caverns west and west-north-west of the town are legendary for stories of deep cavern systems, encounters with hairy humanoids with an attitude, giant serpents and insects, deadly gas pockets, strange electro-magnetic phenomena and unexplained disappearances. One of these is “Blowing Cave” which lies in the mining area NW of Cushman and is located 1/4 mile north of a road leading west from Cushman, one of several caverns in the area, some of them possibly connecting at the deeper levels. Between the large entrance and an underground lake far back in the cave is a trail that winds through an area of rubble or “breakdown”.

The trail is intersected by a crack in the earth [between the entrance and the lake] that, if followed into the breakdown, widens enough to enter. This chasm is reportedly an entrance to the endless networks of the alien underworld.

From reptilians to Greys and everything in between, the majority of these areas have legends, witness accounts, UFO sightings, alien rumors and more, all coinciding with states where clusters of people have simply disappeared.

Does that prove a connection? NO.

It does however indicate that the question should be asked, researched further and debated at length because usually where there is smoke, there is fire.

Resource links will be provided beneath the videos.

People Vanishing In Clusters From Parks Across The US: