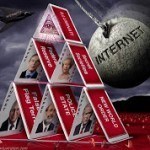 As well as pornography, users may automatically be opted in to blocks on “violent material”, “extremist related content”, “anorexia and eating disorder websites” and “suicide related websites”, “alcohol” and “smoking”. But the list doesn’t stop there. It even extends to blocking “web forums” and “esoteric material“, whatever that is. “Web blocking circumvention tools” is also included, of course.

The definition of “esoteric” makes clear that censorship of broad topics is the goal of this so-called ISP filter:

es·o·ter·ic [es-uh-ter-ik] adjective
1. understood by or meant for only the select few who have special knowledge or interest;
2. belonging to the select few.
3. private; secret; confidential.

Translation: anything outside the acceptable mainstream narrative will be filtered. In short, the free flow of information is under assault with this law.

The organization Open Rights Group refers to this totalitarian tip-toe as “sleepwalking into censorship“:

What’s clear here is that David Cameron wants people to sleepwalk into censorship. We know that people stick with defaults: this is part of the idea behind ‘nudge theory‘ and ‘choice architecture’ that is popular with Cameron.

The implication is that filtering is good, or at least harmless, for anyone, whether adult or child. Of course, this is not true; there’s not just the question of false positives for web users, but the affect on a network economy of excluding a proportion of a legitimate website’s audience.

Open Rights also says the law could be used to play economic favorites, thus undermining the free market on the Internet:

There comes a point that it is simply better to place your sales through Amazon and ebay, and circulate your news and promotions exclusively through Facebook and Twitter, as you know none of these will ever be filtered.

It seems Western government’s voracity for Internet censorship has increased many fold since the Snowden revelations about digital spying.