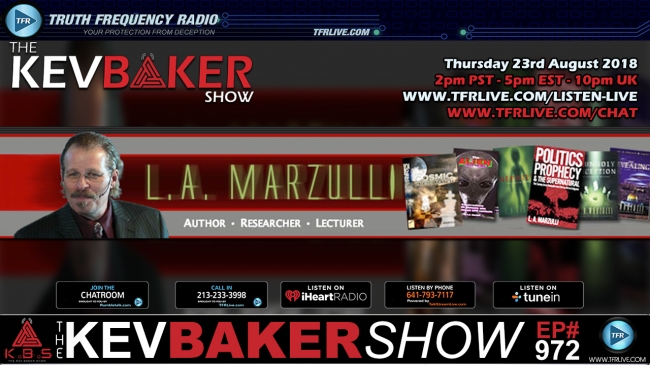 Award winning documentary maker & author L.A. Marzulli joins me for a very hard hitting conversation dealing with the times we are now living in. We talk about the moves towards full disclosure in the field of UFOlogy, picking up pace ever since the Pentagon released details of their secret instigation in the unidentified flying vehicles back in December 2017, the AATIP – Advanced Aviation Threat Identification Program. Increase sighting as time goes by & more eye witnesses coming forward. We discuss all this with L.A. and also information yet to be published in a book called “UFO: Disclosure of Deception”.

We also get into the censorship of the internet and the potential for a civil war in the US. Tie all this in with the state of the middle east and we sure seem to be entering a time that can only be described as Apocalyptic

L.A. will be speaking at an upcoming conference in Geneva, Switzerland & talks about new scientific evidence he will present there for the very first time.

L. A. Marzulli is an author, lecturer and filmmaker. He has penned 12 books including The Nephilim Trilogy which made the CBA best sellers list. He received an honorary doctorate for the series from his mentor Dr. I. D. E. Thomas, who was the Provost at Pacific International University. He was also honored with the Gold Medallion award from Chuck Missler at the K-House conference in 2014. His series On the Trail of the Nephilim I & II are full-color, over-sized books, which uncover startling evidence that there has been a massive cover-up of what he believes are the remains of the Nephilim, the giants mentioned in the Bible.

Marzulli teamed up with film producer Richard Shaw to create The Watchers series. There are now 11 installments in the series and Watchers 7: UFO Physical Evidence won UFO Best Film and the Peoples Choice Awards, at the UFO Congress in 2014. Marzulli and Shaw took their second trip to Peru in January of 2014, filming ancient artifacts and megalithic structures at various locations, and also filmed the unwrapping of a 2000-year-old mummy skull, at Sr. Juan Navarro’s Paracas History Museum, which was revealed in Watchers 8. Marzulli has launched a new series, The Watchman Chronicles and his first independent film was released in March of 2017. The title of the series is “In Their Own Words: UFOs are Real!”