U.S. and Russia Both Sign Human Rights Bills Against Each Other 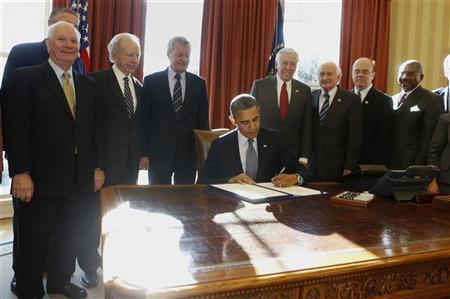 (Reuters) – President Barack Obama on Friday signed a bill that brings U.S. trade relations with Russia into the 21st century but also ushers in a testy era in which the United States could publicly “name and shame” Russian human rights violators.

The measure, which Congress passed by an overwhelming margin, allows Obama to establish “permanent normal trade relations” – or PNTR – with Russia by lifting a Cold War-era restriction on trade.

It also directs Obama to bar Russian human rights violators from entering the United States and freeze any assets they have in U.S. banks. The provision is named in honor of Sergei Magnitsky, a Russian anti-corruption lawyer many U.S. lawmakers believe was beaten to death in a Russian jail in 2009.

Russian President Vladimir Putin on Thursday called the congressional approval of the bill “a purely political and unfriendly act.”

“I don’t get why they would sacrifice U.S.-Russia relations in order to get some political dividends at home,” Putin said.

Moscow kept up the fiery rhetoric on Friday in a Foreign Ministry statement after Obama’s signing. It called the law “shortsighted and dangerous” and an “overt interference into our internal affairs.”

The statement put most of the blame for the Magnitsky measure on U.S. lawmakers, but said it regretted Obama could not “overcome those … who see our country not as a partner but as an enemy.”

U.S.-Russia relations have already been strained over the conflict in Syria and the treatment of critics of the Kremlin since Putin returned to the presidency in May.

“Being a WTO member means Russia’s import standards have to be based on sound science, but their plan to block U.S. beef and pork is anything but sound,” Senate Finance Committee Chairman Max Baucus said, referring to the World Trade Organization, which Russia joined in August.

He urged Moscow to reverse the move.

The Magnitsky law directs Obama to publish the names of Russians deemed to be human rights violators, but allows him to keep some names classified if he decides that it is in the U.S. national security interest.

Congress is due to receive the first list in 120 days and Obama must explain in advance any names he decides to keep secret.

Russian lawmakers give initial approval to a bill that would allow sanctions on U.S. citizens. The vote comes as the U.S. enacts a law that similarly targets Russians.

The bill, which does not specify the kinds of violations that would apply, was named for Dima Yakovlev, a boy who was adopted and died of heatstroke after his American father left him in a parked car for hours four years ago in Virginia. It is expected to receive full parliamentary approval this month and become effective Jan. 1.

The vote by Russian legislators came as President Obama on Friday signed a bill into law that helps increase U.S. business opportunities in Russia, but calls for punishment of Russians accused of human rights violations.

The U.S. law is named for Sergei Magnitsky, a lawyer who died in jail in 2009 after he accused Russian police and tax officials of taking $230 million from the state in a tax refund scam. Independent experts and human rights activists believe his death resulted from torture and beatings he suffered in a Moscow jail while awaiting trial on tax charges officials brought against him.

Georgia to discuss military cooperation with Sweden, Poland and Bulgaria

Georgian Defense Minister Irakli Alasania discussed military cooperation with the foreign ministers of Sweden and Bulgaria, and the head of the Polish presidential administration.

The sides discussed the issues of future military relations, Alasania said after the meeting.

“First of all it is the matter of training and education. We are partners of NATO in Afghanistan. In this regard, we have discussed the future strategy for ensuring security in Afghanistan. The ongoing reforms in the Ministry of Defence were also discussed. We acquainted the guests with our basic views on what changes will be made in the doctrine of the defence,” the Minister of Defence said.

MOSCOW — Thousands of demonstrators have gathered in central Moscow to protest Russian President Vladimir Putin. At least 30 people, including prominent opposition leaders, have been arrested.

As a police helicopter flew above, protesters rallied Saturday in front of Russia’s headquarters for the Federal Security Service, formerly known as the KGB. The demonstration was not sanctioned by Moscow authorities and those who participated or organized the rally faced large fines and arrest. Officials say the fines are meant to protect the security of the average Russian.

Opposition leader Sergei Udaltsov, who was arrested during the event, says it is absurd that people can not express their opinions in Russia.

He says we wanted to hold a peaceful freedom march today within the framework of the law. But he goes on to say that the authorities banned the march for no reason whatsoever. He says the government is afraid of its citizens.

Russians began protesting in December 2011 in the largest demonstrations since the collapse of the Soviet Union. The rallies began after ruling party United Russia won the country’s parliamentary elections.
Demonstrators claim the party won by ballot stuffing and vote rigging, charges it denies.

Since then, demonstrators have continued to rally against Russian President Vladimir Putin’s unprecedented third term. Protesters say he runs the country through a tightly controlled political system and corruption. The Kremlin denies the accusations.

Since Putin has been in office, Russia has seen a major crackdown on dissent. Anti-corruption blogger Alexei Navalny, a major organizer of the anti-Kremlin protests who was also arrested Saturday, had been previously charged with fraud for allegedly stealing millions of dollars in timber and now faces another investigation for fraud. He says the charges against him are politically motivated. Moscow denies the claim. Navalny faces up to 10 years in prison.

Scores of Muscovites, many holding white roses, defied the authorities by turning up at Lubyanka Square, the seat of the FSB security services, despite temperatures of minus 14 degrees C (seven degrees F) and warnings that the unsanctioned rally would be broken up.

Navalny, possibly the most charismatic figure in the protest movement against the Russian president, was detained a day after investigators launched a new criminal probe against him for suspected fraud. patisserie

“It’s raving mad. (They) simply snatched me from the crowd,” Navalny tweeted from inside a police van.

The prominent figures arrested all noted on Twitter that the police vans holding them had been equipped with webcams to keep close watch on their behaviour.

Police put the turnout at around 500 people, half of them journalists and bloggers, but an AFP correspondent said the real number of the protesters appeared to be significantly higher.

People laid white lilies, carnations and chrysanthemums at the Solovetsky Stone, a monument to victims of Stalin-era purges adorning the square, as a helicopter hovered overhead.

One hour into the rally, the monument was blanketed by piles of flowers.

“Our authorities are repressive,” one protester, 48-year-old businessman Andrei Genin, told AFP, sporting a white ribbon, the symbol of the opposition movement against Putin.

City authorities had earlier banned an opposition march through the city, and the opposition Coordination Council had urged Russians to simply turn up at Lubyanka Square.

On the eve of the protest, Russian authorities launched a second major investigation against Navalny, accusing the protest leader and his brother Oleg of embezzling 55 million rubles ($1.8 million, 1.4 million euros) from a trading company.

Navalny, who has already been charged with embezzlement in an earlier case in which he faces up to 10 years in prison, vowed to press ahead with his political activism.

In a separate event, his supporters convened in the Russian capital to establish a new political party that would represent the interests of middle-class urbanities, the backbone of the anti-Putin protests.

Dubbed “The Popular Alliance”, the party will promote the “middle class and the European choice”, activist Leonid Volkov told Echo of Moscow radio, noting that Navalny himself would not be an official member.

The opposition movement is hoping to maintain momentum despite internal divisions between liberals, leftists and nationalists and the authorities’ tough crackdown on dissenters since Putin’s return to the Kremlin in May.

Even supporters admit that the euphoria that marked the first opposition protests that erupted after fraud-tainted parliamentary polls last December has largely died down.