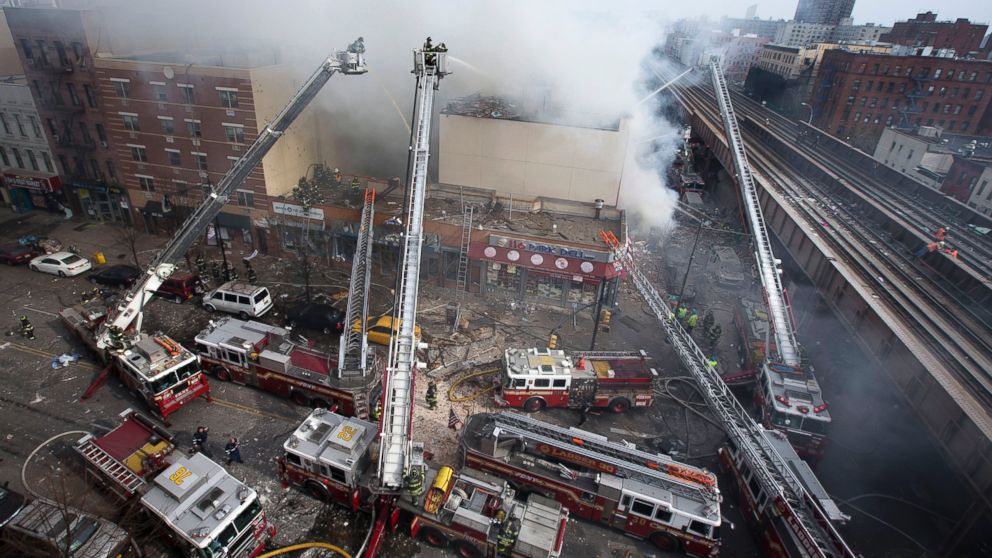 According to ABC News, two people have been killed and at least 22 were injured when what’s thought to be a gas explosion tore through a building in East Harlem in Manhattan, which collapsed at least part of the structure, authorities said.

“This is a tragedy of the worse kind because there was no indication in time to save people,” New York City Mayor Bill de Blasio said. “There will be a search through the rubble of the building once the fire has been put out.”

“They were right there,” one source told ABC News, referring how close the two deceased victims were to the explosion.

An official with New York City said that the casualty “numbers are going to change.”

Plumes of thick smoke engulfed the area around the building at 116th Street and Park Avenue after residents reported hearing a loud explosion around 9:30 a.m. The first 911 call came in at 9:31 a.m. and firefighters were on the scene two minutes later, Fire Commissioner Sal Cassano said.

Con Edison was responding to a report of a gas odor at 1652 Park Ave., officials said. The call came in at 9:13 a.m. from a resident of that building who indicated the odor may have been coming from outside the building. Two Con Edison crews were dispatched at 9:15 a.m., officials said, noting they arrived just after the explosion occurred. The street is served by an 8-inch low-pressure gas main, utility officials said.

Harlem Hospital confirmed it has received five patients, one child with serious injuries, while another three adults are in stable condition and one adult walked in reporting hearing loss. Mount Sinai Health released a statement saying it is treating seven patients, and St. Luke’s Hospital is treating one, with more patients expected on the way.

Even though the FBI was on the scene, there has been no indication of terror or crime, authorities said.

There are “no indications of foul play,” de Blasio said.

Google images of the building show two commercial storefronts on the ground floor with residential apartments above those storefronts.

“I was standing in my room when I heard the explosion and the building shook at the same time,” said Rosario Valderdo, who lives in the apartment building next door. “The windows were shattered and I grabbed my dog and went outside. The building had collapsed and there were people underneath it and they were trying to take them away from there.”

Shattered windows in nearby storefronts showed the extent of the explosion.

“The explosion woke me up. The building shook, my mother’s window fell in,” said neighbor Adam Ocasio. “You could see the smoke and debris as soon as you got outside.”

Brandon Whitaker was also sleeping in his home in the nearby Taft Houses when he was awoken by the explosion.

There were a total of 15 residential units in the two buildings, six in one and nine in the other. Nine people are currently unaccounted for, but there is no indication whether those people are injured, de Blasio said.

“We are expending every effort to locate each and every loved one,” said de Blasio. “We don’t want to speculate who might be in the building and their situation until we have the ability to get closer.”

Cassano said it will take a while to get everyone out, but K9 search and rescue dogs on the scene have not detected any other survivors at this point, which was a good sign.