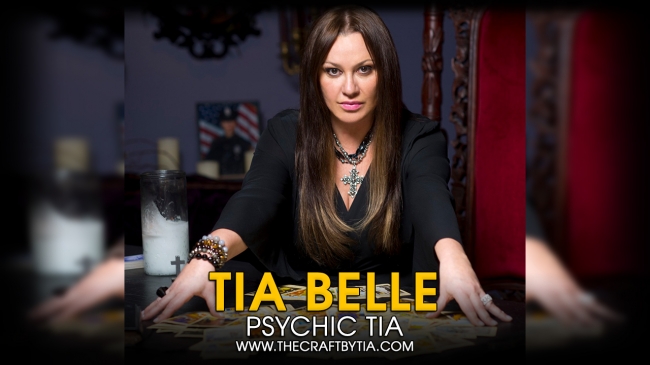 The afterlife is something that many people find fascinating. Thoughts about what actually happens when we die cause a lot of wonder and unanswered questions. Those who profess to have a psychic connection to spirits from beyond the grave offer the promise of a glimpse into the afterlife. While there are many sceptics about the authenticity of such happenings, some psychics, such as Tia Belle, offer so much potential proof of their abilities that they end up with a large following of those who believe wholeheartedly in the person’s abilities. But how did someone like Tia Belle end up where she is today? What happened to bring Tia Belle into the limelight of her own show and where is she planning to go moving forward?

Tia Belle was born in New Jersey and raised in New Jersey. As a toddler Tia Belle started receiving visits from those who had passed away. When these occurrences first started, she was not scared. Tia remembers those early visits as leaving her with a calm, reassuring feeling. Around the age of 3 she began to understand that this ability was not common among other children. She spent the next several years trying to hide what she could see from most people. However, with the help of a supportive family she was able to start developing her gift.

By the time Tia was 11, she had begun to use her gifts for the benefit of her family and close friends. By this time she realized that not only was she receiving visits from beyond the grave, she was also able to see into the future. With this ability, Tia started reading Tarot cards for those close to her, including some of her school teachers. The more readings she did, the more in tune with her gift she became. After a while, some of her family and friends began seeking her out for consultations on a regular basis. However, she continued to keep her abilities a secret from the majority of people around her.

It was around this time that Tia Belle learned about Wicca. The Wiccan religion focuses on aspects of witchcraft and there are typically two deities associated with it—a god and a goddess. Those who are part of Wicca turn to nature for guidance and help in various aspects of life. By studying Wicca, Tia was able to become more in tune with her gifts. She also started down a path that would lead her towards her future. However, before settling into her calling, there were additional life experiences in her future.

After graduating from high school, Tia went through training to become a police officer and worked with crime scene investigation. On the job she kept her gift of seeing the deceased a secret. While she was not able to use her gift on the job, she was able to work towards solving a number of crimes. Her job was fulfilling, but she still felt as though something was missing.

While working on the force, Tia became incredibly ill. As she became sicker and sicker, she started to feel her body shutting down. She felt as though the end was near, and she was at peace with how she would spend eternity. However, by this point, she had a son and she was very concerned about his well-being. After spending time with God she started to get better, and she knew what she had to do with her life.

It took a while for her to fully recover, but once she did, Tia Belle left law enforcement to pursue a higher calling. While sick she had realized that her life would be better spent helping people through the use of her gifts. Tia began working full time providing people with information from loved ones who have passed, and offering guidance for their future success and happiness in life. While she still has not had a chance to use her gift to help her former law enforcement colleagues, she would be more than happy to offer assistance if the need should ever arise. She does keep in touch, though, as some of them receive consultations from her on a regular basis.

Religion in some form has always been an important aspect of Tia’s life. She still utilizes the teachings of Wicca, but she has also been baptized in Santeria. Santeria is a multifaceted religion stemming from West African and Caribbean cultures. Santeria is a rather complex religion that uses ceremonies and rituals in various ways. The ways of Santeria blend perfectly into the lifestyle created by Tia, especially considering what her life became. No matter what religious title is assigned to the teachings she is following, ultimately she gives all of the credit for her gifts to God.

A direct extension of her work as a physic and medium has been to create her store, The Craft. At The Craft, Tia sells various items related to the assistance she offers others, including candles, sage for cleansing, and even spells for further assistance. Her store is open several days a week and she provides in-store readings, by appointment, and sells her wares. Tia also does incantations and will help clients rid houses of unwanted spirits, when needed.

As her reputation as a medium has grown, Tia has gained some famous clients. A number of the cast from the Real Housewives of New Jersey regularly contact Tia for a reading. In fact, she made a fairly regular appearance on the show for a while. Through that experience, she was able to gain the attention of television producers and she was offered her own show, Psychic Tia.

Psychic Tia aired for one season on A & E. During the show she was able to highlight her gifts and show potential clients what she has to offer. While many people were very interested in her abilities and in her program, the show was not renewed for any more seasons. Currently, there is a petition circulating to have the show re-instated, but the future of the show currently looks bleak. But while the show may not have been overly successful, Tia’s business in New Jersey is thriving.

Tia Belle started out keeping her psychic abilities a secret from just about everyone. As her life experiences molded her life, she realized she needed to not only embrace her gifts, but she needed to share her gifts with as many people as she could. This realization led her to owning her own store and providing guidance and help to those who seek her assistance, as well as her own television show. What started out as her biggest secret ended up being her life’s work.