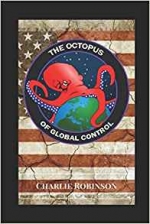 Im joined by returning guest, author of The Octopus Of Global Control, Charlie Robinson to discuss some of the things going on in the world right now and to cover some of the quotes & topics in his book. We open up discussing the bizarre pact between Trump & the guy he dubbed the “rocket man”, North Korean leader Kim Jong Un. Additionally, what was Kim Khardashian doing at the oval office?

We also discuss the war on drugs, CIA drug/gun running, the Clinton crime cartel & other government corruption before tackling a topic that is close to both of our hearts, space, or in particular NASA. Never A Straight Answer is the best use of their acronym and it holds true no matter what it is the NASA are trying to tell us. We get into the moon landings, our thoughts on space & Elon Musk being a game changer that all us space geeks have been waiting for.

Charlie Robinson is the author of The Octopus of Global Control, a controversial and humorous book that takes quotes from over 500 witnesses to some of history’s greatest events, and uses them to piece together and expose a century-long plan for world domination.

He had a front-row seat to the fraud and corruption in the mortgage industry during his career in Las Vegas real estate, and he credits John Perkin’s book Confessions of an Economic Hitman as the final piece of the puzzle that helped him to really see how the American government operates as the enforcement arm for multinational companies.

Then They Came For Our Memes

Thats right, they are coming for the memes! I go over a document from the EU that outlines the ‘dangers’ posed by the effective memes that the alt-right are infamous for. This is getting ridiculous, truly. I read the key parts of the document & give my opinion on this latest lunacy. I then play...

Mark Kulacz joins me to go over his extensive research into the invention of the computer & to break down just who exactly Bill Gates is. There is so much written & said about Bill Gates over the past 18 months its hard to know whats true & whats not, so Mark breaks down exactly...

Under The Buck Full Moon with Mary Dusina

Mary Dusina, our resident astrologer, is on hand to talk us through the latest full moon, the Buck moon as its called. We open up the lines for Mary to take your calls & to give a reading to the lucky callers ...