The Metamorphosis of Hillary Clinton 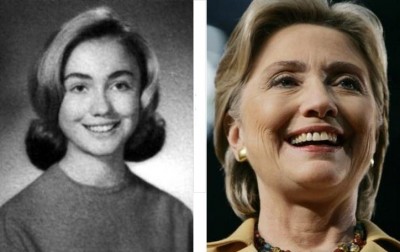 Once upon a time, Hillary Rodham, the 1969 Wellesley valedictorian, studied the organizing tactics of Saul Alinsky and backed Eugene McCarthy’s presidential run. At commencement, she spoke of a conservative strain in New Left protests that harked back to old values and ideals, and she dared to challenge the United States Senator who preceded her on the podium.

Were she still among us, that passionate young woman would surely oppose the nomination of Hillary Rodham Clinton (HRC) for the U.S. presidency.

The former First Lady, Senator and Secretary of State no doubt concurs with the nineteenth century French politician who said (more or less): “If a person is not a socialist at 20, he has no heart. If he is still a socialist at 50 he has no head.” Of course, idealism is impractical, an unaffordable luxury for career politicians, who must learn to play ball with the powers that be if they wish to survive in public life. And HRC is a political survivor par excellence.

Marrying Bill Clinton and moving to Arkansas, Hillary Rodham learned the art of compromise, beginning her own metamorphosis into the corporate entity, HRC. When Clinton ran for president in 1992, kicking off a long national soap opera, HRC learned to lie in public on venues like Sixty Minutes.

Heading the Clinton White House Task Force on National Health Care Reform, HRC suffered an embarrassing public defeat at the hands of entrenched health care and insurance interests and their Congressional minions. HRC’s principled activism as First Lady was muted by the rabid efforts of Independent Prosecutor Kenneth Starr to implicate her in one scandal or another: Whitewater, Vince Foster, Travelgate or Filegate. Despite Starr’s marathon efforts, at huge public expense, no charges stuck.

Both Clintons, but especially HRC, infuriated their Republican opponents with an intensity not seen since the days of Franklin and Eleanor Roosevelt, like their later blinding hatred of Barack Obama. HRC’s gender seemed to be the real problem for conservatives, like Obama’s race, challenging and offending the white male power establishment. Ultimately Starr’s pursuit proved superfluous. Bill Clinton’s libido sabotaged his presidency more effectively than any of his many foes.

As the sordid saga of the President’s dalliance with an intern led to his public humiliation and impeachment, HRC’s public approval ratings shot up to 70 percent. She seized an opportunity to get out from under her husband’s shadow and make her own way. Running a smart, incredibly expensive campaign, blessed with weak opposition, HRC was elected to the Senate from New York.

Chastened by her exhausting persecution as First Lady, HRC apparently decided as a member of Congress to go along to get along. During her first term in office she voted for every bellicose bit of war legislation the Bush administration saw fit to ram down the throats of the American people in the wake of 9/11: military action against Afghanistan, the Patriot Act, the Iraq War Resolution. Not until her second term, when the deadly, misbegotten blunders of the Bush-Cheney junta became apparent to all but the most unregenerate jingos, did HRC modify her war support. By then it was too late.

As Secretary of State in the Obama administration, HRC supported the troop surge in Afghanistan and concurred with Obama policies which continued Bush-Cheney policies. Wikileaks revealed that HRC, like Condoleeza Rice before her, ordered U.S. diplomats to spy on United Nations officials, including representatives of friendly countries and U.N. Secretary General Ban Ki-Moon. HRC called the Wikileaks document release “an attack on the international community.”

HRC also criticized Bradley Manning for his disclosures of U.S. war crimes and illegal State Department collusion with foreign oil companies. Of Edward Snowden, she said, “I don’t understand why he couldn’t have been part of the debate at home… because we have all these protections for whistleblowers.” But President Obama, while promising to protect whistleblowers, has prosecuted more leaks of classified information than all previous administrations combined. HRC’s disingenuous remarks about Snowden reveal either her own ignorance or her assumption of ours.

HRC’s successor, Secretary of State John Kerry, accused Snowden of helping terrorists and endangering lives. Kerry told him to “man up” and return home. The brave young Vietnam war veteran, who tossed his medals on the Capitol steps and told the Senate Foreign Relations Committee, “How do you ask a man to be the last man to die for a mistake?” was another idealist later betrayed by his older, long-embedded, sold-out soul.

Regarding war and civil rights, Hillary Rodham and HRC share scant common ground. The heart of the 22 year-old liberal lies buried deep beneath the travel-worn head of the 66 year-old pragmatist. In 2008 Barack Obama promised Hope and Change. But he failed to deliver. As would Hillary.

HRC holds an appeal for voters who want the first female president. But President HRC would practice the very “politics as usual” that the first Wellesley student commencement speaker challenged to change.

James McEnteer is the author of Shooting the Truth: the Rise of American Documentaries (Praeger 2006). He lives in Quito, Ecuador.