Enemy of the State Chris Spivey on HOAX FALSE FLAGS >> 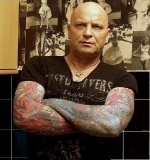 Mr Chris Spivey is tonights very special guest on KBS and what a show!

Chris talks about his beginnings in the alternative media and how it led to his recent high profile arrest for daring to question the official narrative being spun around the Woolwich beheading. Due to the on-going nature of this case, Kev and Marty are careful to keep Chris away from anything that may be used against him at a time when he is unquestionably a person of interest to the security services.

Kev then explains, or confesses lol to the fact that at the time of the Woolwich incident that it was just a stretch too far that everything had to be faked, but over time, and having listened to people such as Ole Dammegard, as now accepted that most, if not all, that we see on the main stream.

This leads Chris to lay out the anomolies surrounding the Glasgow bin lorry incident. The evidence that Chris has collected and lays out in the show most definately raises questions, namely, the use of CRISIS ACTORS! However, it doesnt stop at that incident, oh no, as with everything else it leads to other “spectaculars” and Chris lays out connections between Glasgow and the recent Australian shooting at the Lindt Cafe in Sydney!

Chris and the guys talk about the social services and the fact that they would be more aptly title “The Child Snatchers” as Marty raises the issue of adoption quotas. Chris himself is the target of social services as they are targetting his grandchild, all because he dares to talk the truth.

The conversation then ends up on the Parlimentary pedophile scandal and Leon Brittan. The cover-ups continue but with heroes like CHRIS SPIVEY out there, there will never be any peace for these parasites, nor should there be.

WHAT DOESN’T AFFECT YOU PERSONALLY, SHOULD STILL BLOODY WELL OFFEND YOU DEEPLY