The Genocidal Intentions Behind the UN Small Arms Treaty 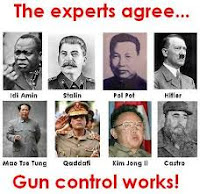 In September of 2007, I interviewed Dr. Lorraine Day, the former Orthopedic Chief of Staff at San Francisco General Hospital and the wife of retired Congressman Bill Dannemeyer, about the evils of the present medical system. The initial portion of the interview went as expected and was filled with scores of examples of pharmaceutical and medical insurance company greed and abuse which has resulted in the deaths of untold numbers of patients. Then Dr. Day dropped a bombshell when, at the conclusion of the interview, she unabashedly stated that the global elite want to murder 95% of the population.

This is precisely the goal of the United Nations Small Arms Treaty, and Dr. Day could have easily been talking about the increased probability of this event coming to fruition.

The Obama administration has announced that it will “conduct a thorough review” of the UN’s newly enacted gun control pact in order to properly determine whether or not to sign the treaty. The UN treaty would codify the proposition that national governments should have a monopoly on weapons and citizens should be without any means of self-defense.

UN Justification to Seize All Arms

UN Secretary General, Ban Ki-Moon, has proclaimed that the treaty “will help to keep warlords, pirates, terrorists, criminals and their like from acquiring deadly arms.”

The primary objective of the treaty is to regulate the sale and transfer of small arms and light weapons which includes all civilian-owned firearms.

Article 2, Section 3 and Article 11 specifies that nothing in the treaty will “apply to the international movement of conventional arms by, or on behalf of, a State Party for its use provided that the conventional arms remain under that State Party’s ownership.” In other words, known arms traffickers, such as the CIA, will not have their arms industry interfered with and al-Qaeda will continue to be armed by the CIA in order to continue in help our criminal government to overthrow such regimes as Libya and Syria. Nothing in the language of the treaty prohibits the sale of arms from States to “non-state actors” (e.g. terrorist organizations).

Interestingly, North Korea opposed the treaty on this point. It could accurately be said that the rogue and criminal regime of North Korea is a closer ally to Second Amendment supporters than the Obama administration which is sworn to defend the Constitution. Further, Article 3 states that States have the inherent right to arm themselves and to control weaponry with their territorial boundaries. Nowhere in the UN document does it mention the right of individual citizens to defend themselves against invasion or genocide.

The Obama administration has lent its enthusiastic support of the United Nations’ goal of “general and complete disarmament” in which the UN will possess exclusivity over all weapons on a permanent basis.

How well has disarmament worked to protect the citizens being protected by the United Nations? Do you remember in 1994, when Colonel Dallaire from the Canadian contingent of the UN blue-helmeted peace keepers reported to Kofi Annan that he learned of a genocidal plot that the Hutu-dominated regime was planning to massacre the Tutsi population? Dallaire asked the prominent UN official at the time, Annan, for permission to disarm the Hutus and was told to stand down and to do nothing.

In the next 90 days, one million Tutsis were murdered while the “Blue Helmets” observed.

Following the 90-day murder spree, a disillusioned Dallaire became a homeless, alcoholic, depressed person. Annan was promoted to Secretary General of the United Nations and won the Nobel Peace Prize. And we are going to let these murderous thugs control all weapons on the planet?

In the 20th century, governments murdered 260 million people, which followed gun confiscations. Can the UN be trusted to not commit genocide against the people of the world? And once the United Nations has control over all weapons, what can Americans expect? Let’s allow present and past United Nations officials to speak to this point.

A total world population of 250-300 million people, a 95% decline from present levels, would be ideal. — Ted Turner, in an interview with Audubon magazine and UN Contributor

In order to stabilize world population, we must eliminate 350,000 people per day. It is a horrible thing to say, but it is just as bad not to say it. — J. Cousteau, 1991 explorer and UNESCO courier

The present vast overpopulation, now far beyond the world carrying capacity, cannot be answered by future reductions in the birth rate due to contraception, sterilization and abortion, but must be met in the present by the reduction of numbers presently existing. This must be done by whatever means necessary. — Initiative for the United Nations ECO-92 EARTH CHARTER

And we are going to let these UN thugs decide who can own a gun in America?

I have said that I am opposed to an open civil war against our banker-hijacked government. However, when it comes to gun confiscation, Americans must collectively resist with every fiber of their being the attempted disarmament of its citizens. We all know that gun confiscation always precedes genocide. If Obama lets the United Nations do his dirty work of disarming the people, America will have to fight.

We have a choice America, we can fight our criminal government and the domestically stationed foreign mercenaries as they attempt to take the guns, or we can resist being hauled into a Wackenhut bus on the way to a FEMA camp for extermination. If Obama’s UN colleagues come for the guns, the only choice we will have is when we fight, not if we fight. I prefer to fight these forces with weapons rather than with bare hands.

If we adopt the UN Small Arms Treaty, lock and load America!

Dave is an award winning psychology, statistics and research professor, a college basketball coach, a mental health counselor, a political activist and writer who has published dozens of editorials and articles in several publications such as Freedoms Phoenix, News With Views and The Arizona Republic.

The Common Sense Show features a wide variety of important topics that range from the loss of constitutional liberties, to the subsequent implementation of a police state under world governance, to exploring the limits of human potential. The primary purpose of The Common Sense Show is to provide Americans with the tools necessary to reclaim both our individual and national sovereignty.