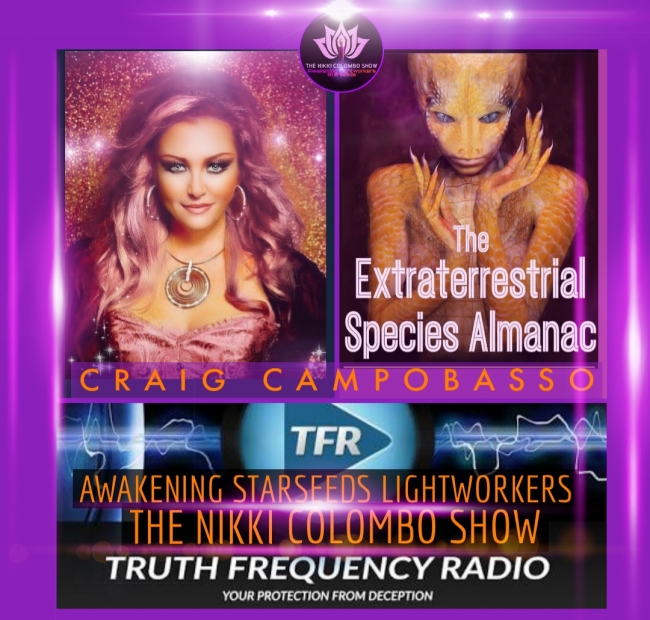 Want to know about all the Extraterrestrials , where they came from, their names, what they look like? Tonights guest Multiple award-winning filmmaker and Emmy-nominated casting director Craig Campobasso was fifteen when he started in the entertainment business. His young acting career was off to a great start; he landed his first national commercial for McDonald’s chicken sandwich, and spoke his first line of dialogue to Tuesday Weld in a MOW.

Craig directed, wrote and produced the short film Stranger at the Pentagon, which was adapted from the popular UFO book authored by the late Dr. Frank E. Stranges. After production, the short film collected accolades. In September 2014, it won Best Sci-Fi film at the Burbank International Film Festival, selling out all 275 seats—a first for the festival. In 2015, it won a Remi Award at the Worldfest Houston International Film Festival for Best Sci-Fi Short.

His latest best-selling book “The Extraterrestrial Species Almanac: The Ultimate Guide to Greys, Reptilians, Hybrids, and Nordics” was released on January 1, 2021.
His next untitled book for MUFON books is due out in October 2022.
ABOUT BOOK
This is the ultimate field guide to the 82 extraterrestrial species that populate the universe. ET enthusiast Craig Campobasso explores the origins, physical characteristics, technological and consciousness abilities, dimensional capacities, belief systems, and cosmic agendas of each of the species.
The species fall into two categories: 1) benevolent races, which function as the guardians of humanity, whose goals include helping people overcome duality, healing, and protecting; and 2) malevolent races, which are responsible for abductions, cloning, and ultimately domination.

This intergalactic expose will entertain all those interested in UFOs, aliens, ETs. Sci-fi and fantasy fans of the Marvel universe; Star Trek, Star Wars, and other popular TV shows like Ancient Aliens; Roswell, and Project Blue Book are prime targets for this book that delves deep into who the real extraterrestrials are and what they want with the people of Earth.
Twitter: @CraigCampobasso

“The Extraterrestrial Species Almanac: The Ultimate Guide to Greys, Reptilians, Hybrids, and Nordics”

Link to Fundraiser for ET Almanac Documentary. Lori Wagner is producing with me. We need to raise funds for CGI to bring the ETs to life!
https://gofund.me/db31535d