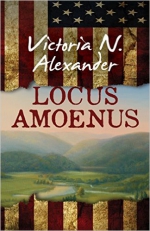 Fiction writer, Tori Alexander talks about her new book, LOCUS AMOENUS– a modern day Hamlet for the Post 9/11 age. In this beautifully nuanced dark comedy, a 9/11 widow and her son, Hamlet, have retreated from Brooklyn to the idyllic rural countryside upstate, where for nearly eight years they have run a sustainable farm. Hamlet, who is now eighteen, is beginning to suspect that something is rotten in the United States of America, where health, happiness, and freedom are traded for cheap Walmart goods, Paxil, endless war, standard curriculum, and environmental degradation. He becomes very depressed when, on the very day of the 8th anniversary of his father’s death, his mother marries a bureaucrat named Claudius, who works for NIST. The plot thickens when 9/11 truth investigator, Horatio, brings dust research to this modern Hamlet, proving the presence of Thermatic explosives manufactured at Livermore. This sets off a personal odyssey for the son, who is forced to confront the great forces hiding evidence behind his father’s death.

“The most stark divisions in America may spring not from political, ethnic or racial backgrounds but from informational sources…This is a theme explored in the darkly humorous novel, Locus Amoenus.” Woodstock Times

Tori takes 9/11 into a whole new genre. Hope you check it out!

MORE FROM The Covert Report >>

A WEEK AT BIDEN’S

What a bad week for Joe and the Democrats! Jim Fetzer talks about the G7 brain freeze. FBI instigators tied to the January 6 showdown at the Capitol Heart inflammation in Covid vaxxers and ramifications for college and professional athletes. Shattering revelations about the Georgia and Arizona election audits. Major audits are already underway in...

A staggering and sober conversation about Israel’s apartheid against Palestine. Israel’s attack on Islam’s sacred Al Aqsa Mosque and Dome of the Rock in Jerusalem, during Ramadan no less, look like a calculated effort by Bibi Netanyahu to manipulate Joe Biden’s puppet handlers to Israel’s defense. If so, it has backfired. While most U.S media...

Today’s guest, Russell Bentley, aka the Donbass Cowboy, gives an insiders’ perspective of the geopolitical storm amassing between Ukraine and Russia over break away provinces in Crimea, Donetsk and Lugansk. Russell joined the freedom fighters of Donbass back in 2014, and has watched the conflict evolve from its opening hours. Russell speaks with astonishing calm,...

ALL SHOWS BY The Covert Report