The Brotherhood Of The Screaming Abyss – Released w/ Dennis McKenna >> 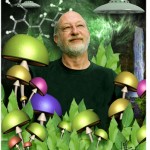 Chris Geo & Sheree Geo speak with author and entheobotonist Dennis McKenna about his new book, The Brotherhood of The Screaming Abyss. Dennis talks about his life as a psychonaut with his late brother, Terrance McKenna and also discusses DMT and Ayahuasca and what we can learn from these remarkable plants.

Dennis McKenna is an ethno-pharmacologist who has studied plant hallucinogens for over forty years. In 1975 he co-authored the book Invisible Landscape with his brother Terence McKenna. The book was based on their investigations of Amazonian hallucinogens in 1971. He also acted as co-star of his brother’s book True Hallucinations, which further described their experiences while in the Amazon. He earned his Master’s degree in botany at the University of Hawaii in 1979, and his Doctorate in Botanical Sciences in 1984 from the University of British Columbia. Since that time, he has conducted extensive ethnobotanical fieldwork in the Peruvian, Colombian, and Brazilian Amazon. In 2001 he joined the faculty of the Center for Spirituality and Healing at the University of Minnesota. He is a founding board member of the Heffter Research Institute, serves on the Advisory Board of the American Botanical Council, and has been a board member for Botanical Dimensions. In 2012, Dennis released The Brotherhood of the Screaming Abyss!, a biography of his life’s adventures with Terence.

The Brotherhood of the Screaming Abyss is available on Amazon for $9 in E Book form.

MORE FROM Beyond The Veil >>

Chris and Sheree start off 2020 – and indeed, a whole new decade – off right, with one of our favorite guests, Auset Eyowaku, to discuss The Moon Projection Reality, Simulation Jumping, and the false dichotomy of light vs. dark within us all that ultimately divides ourselves and prevents us from achieving our true potential....

How to remove spiritual implants and octopus tentacles

Chris and Sheree discuss: How to remove Spiritual Implants and Octopus Tentacles...

Chris and Sheree speak with Richard Allen Miller about anything and everything!...

The Final Harvest of Souls – Ascension – and Soul Traps

The Final Harvest of Souls – Ascension – and Soul Traps...

The Aten, RA, The Law of One, and Comments

ALL SHOWS BY Beyond The Veil