[Editor’s Note: Our cover story this week focuses on the the drug ayahuasca and its growing popularity.]

Chance are pretty good that you’ve heard about ayahuasca by now. While well-known musicians and actors have been touting the therapeutic drug’s benefits for decades, it’s exceedingly trendy these days, and has been referenced in episodes of Weeds and Nip/Tuck and the movie Wanderlust. 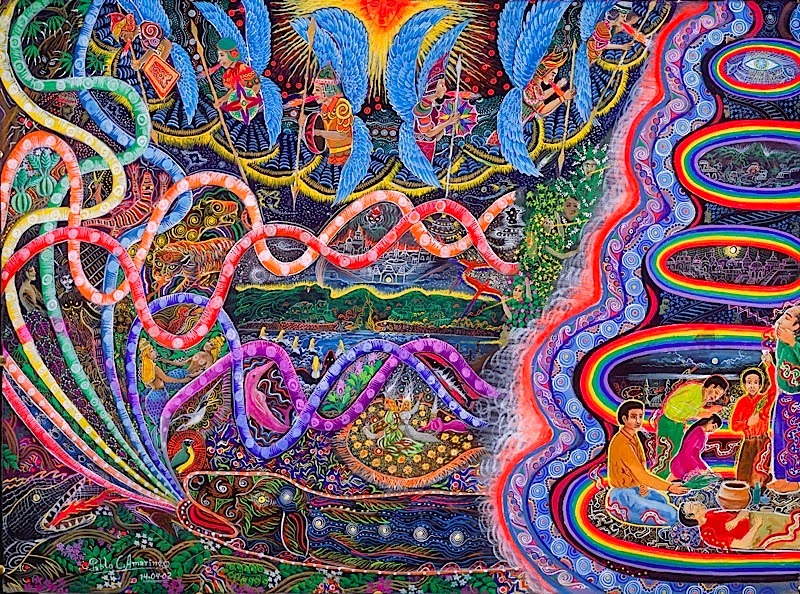 The L.A. indie musician, formerly of the Fleet Foxes, has referenced the substance, singing “we could do ayahuasca” in his song “I’m writing a Novel.” Freak folk singer Devendra Banhart also has referenced participating in ceremonies, as have members of British indie group The Klaxons.

See also: What Is Ayahuasca and Why Is Everyone Singing About It?

During a 2012 event called the Ayahuasca Monologues, The Gossip Girl actor said he did Ayahuasca with an indigenous tribe in the Columbian rainforest with the hopes of going “back to New York City with my glittering spiritual tool” but then experienced difficulty purging during several ceremonies. When he finally did, he said, “I dropped into my heart, and I felt it in my blood and all of the discomfort and this mercurial nature of perceptual boundaries during these ceremonies seemed to melt away and all melt into one gleaming psychic arrow pointing towards my heart. … And that was the simplest but, to this day, the most profound moment of my life.”

In his 2005 autobiography, Broken Music, Sting devotes 60 pages on his experience about traveling to the Amazon in Brazil with his wife, Trudie Styler, to do ayahuasca. “I realized for the first time that this is the only genuine religious experience I have ever had,” Sting says in the 2010 documentary 2012: Time for Change. “There is definitely a higher intelligence at work in you during this experience.” He has since become one of aya’s most vocal celeb supporters and, with Styler, also founded the Rainforest Foundation, which works to protect the rainforest where ayahuasca comes from and the indigenous tribes there.

Simon recounts an ayahuasca experience in the 1990 song “Spirit Voices,” which describes his journey into the Amazon. “I drank a cup of herbal brew,” he sings. “Then the sweetness in the air/combined with the lightness in my head/and I heard the jungle breathing in the bamboo.” In our 2012 interview, the former Black Crowes frontman said, “I was very lucky, eight or nine years ago, to have an ayahuasca experience. Even though a lot of my belief systems had let me up to that day, and believing in the esoteric realities of aggressive psychedelic and entheogen-driven experience, that was the literal opening up of all my minds and hearts. Where my mind and heart and soul all coalesce of having at least the initial understanding of the interconnectedness of all living entities in the universe, really.”

A journalist and science editor of Vice Magazine, Morris has written extensively about his drug use as well as his use of the controversial pharmahuasca, a synthetic version of ayahuasca tea.

“What people are experiencing through the ayahuasca is really what is changing people. It’s not the aya itself,” says Australian-born, L.A.-based musician Ben Lee, who has made indie pop since the ’90s and released his ayahuasca-inspired 10th album, Welcome to the Work, last spring. “If used properly, it can help people access reality, and it’s really reality that’s inspiring people.”

Editor’s note: The original version of this story said that Rogan had done ayahuasca; while he did indeed dedicate an episode of his podcast to aya, and talked with his producer about the experience, he himself has not tried it.

The cover image he created for Tool’s Lateralus incorporates ayahuasca imagery. In a 2008 interview, Grey said, “I think ayahuasca can show us how beautiful we are inside and what kinds of possibilities we have for love and for actions of kindness.”

In a 2012 interview with the Huffington Post, Amos says she’s done ayahuasca many times, starting in the 1980s. “With ayahuasca it was approached as — you fasted for a day and there was a group of us that would meet with someone that was running [the situation]. You would work for a week beforehand and write about what you were hoping to work through and you would write what you were hoping to achieve. And then you got back together the next week after you’d done it. … It was very structured.”

Lindsay Lohan Reveals She Had a Miscarriage While Filming OWN Show

During the finale of her OWN show last night, Lindsay Lohan revealed that she recently suffered a miscarriage.

When asked to reflect on her experience filming the docu-series, Lindsay responded, “No one knows this — I had a miscarriage for those weeks I took off.” She went on to explain that in a previous episode, when she refused to come down for filming, it was because “I couldn’t move, I was sick. Mentally, that messes with you.” (She didn’t reveal the identity of the father, nor did she provide any other details.)

She went on, “Watching this series, I just know how I felt at that moment and I can relate to that girl. It sounds kind of crazy. But I’m like, ‘Oh my god, this is really sad. Who’s helping her?'”

But she ended on a positive note, which is good — she says that she did a cleanse by taking ayahuasca (???), which has helped her let go of the “wreckage of [her] past life.” She also says she’s doing a movie that starts filming in June: “I’m in a good place and I don’t want to mess with that because it feels good.”