(BEIRUT) — Syrian ground and air forces bombarded rebel strongholds on the outskirts of Damascus and other areas around the country Friday while anti-government forces targeted a military post near the capital with a car bomb, activists said.

The Britain-based Syrian Observatory for Human Rights said warplanes targeted neighborhoods around the capital including Douma, which troops have been trying to recapture for weeks. Two air raids there Thursday killed 12 people and caused heavy damage.

The Observatory added that a car bomb blew up outside a military intelligence building in the northern Damascus suburb of Nabk but had no immediate word on casualties.An amateur video posted online showed a strong explosion with black smoke billowing from Nabk and the narrator said the blast targeted the military intelligence facility. The video appeared genuine and corresponded to other AP reporting on the events depicted. 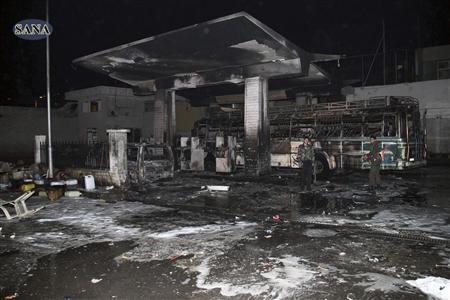 (Reuters) – Syria on Friday said a car bomb at a crowded petrol station in Damascus on Thursday night was set off by “terrorists”, a term it uses for rebels seeking to topple President Bashar al-Assad.

The bomb killed 11 people and wounded 40 at a station packed with Syrians queuing for fuel, which has become scarce in the 21-month insurgency against Assad, in the second petrol station attack in the capital this week, opposition activists said.

The United Nations says more than 60,000 people have been killed in the civil war, the longest, bloodiest conflict born from uprisings across the Arab world in the past two years.

Dozens of people were incinerated in an air strike as they waited for fuel at another Damascus petrol station on Wednesday, according to opposition sources.

The semi-official al-Ikhbariya television station aired its own footage from Barzeh, indicating the attack struck a government-held area. Barzeh’s residents include members of the Sunni Muslim majority and religious and ethnic minorities.

The rebels hold a crescent of suburbs on the southern and eastern edges of Damascus, which have come under bombardment by government forces. Rebel forces also seized territory in Syria’s north and east during advances in the second half of 2012.

The war pits rebels, mainly from the Sunni Muslim majority, against a government supported by members of Assad’s Shi’ite-derived Alawite sect and some members of other minorities who fear revenge if he falls. Assad’s family has ruled for 42 years since his father seized power in a coup.

Fighting has forced 560,000 Syrians to flee to neighboring countries, according to the U.N.

Israel’s new barrier with Syria: Another brick in the ‘apartheid’ wall?

The walls around Israel are growing as the country’s army builds a new physical barrier, this time on its border with Syria. The wall will reportedly begin in the southern part of the occupied Golan Heights, extending north from there.

­Israel says the move is designed to safeguard its citizens from fallout from the conflict in war-torn Syria. Others say the wall is just a new installment in one of Israel’s most recognizable tools of injustice.

Juma says the wall will end up only remaining in place temporarily, as those who oppose it will stand up for their rights.

RT: Israel is citing the conflict in Syria and the rise of Islamist extremism there as its reasons. Doesn’t Israel have a valid concern in this case?

Jamal Juma: Israel has to recalculate what they’re doing in the Middle East. Israel tries all the time to build walls around itself, claiming that people hate them and target them. Israel has harmed the whole region around it. Israel is building a wall around Palestinian areas, claiming it’s for security – but it amounts to apartheid for the Palestinian people. They built a wall around Gaza and turned it into a jail – the biggest prison in the world. We know how devastating the situation in Gaza is.

They still occupy parts of Syria, and are now building a wall on occupied land; they want to keep this land and keep themselves as occupiers. To keep building walls is not a solution. It needs to make peace with the region. In Syria and the Arab world, there are six million Palestinian refugees because of Israel. They have to solve the problem of the refugees, to give them the right to return to their homeland that has been taken from them. Israel cannot build its future at the expense of the people of the region. And building walls to protect themselves… walls are not going to protect the Israelis. People have rights, and they will keep claiming those rights.

No peace in the Middle East: death toll from Syrian conflict tops 60,000

An unexploded Syrian missile lodges in a street near the capital, Damascus, as fighting continues to rage between rebels and factions loyal to president Bashar Al-Assad, who has ruled the country since 2000.

January 3, 2013 – SYRIA – The overall death toll in devastated Syria has surpassed an estimated 60,000 people, the United Nations said Wednesday, a dramatic figure that could skyrocket as the civil war persists. To put it in perspective: 60,000 people is roughly the population of Terre Haute, Indiana; or Cheyenne, Wyoming. It’s how many people would fit in Dodger Stadium, and it’s more than the 50,000-plus U.S. combat deaths in Vietnam. The figure is about 15,000 higher than the death toll CNN had cited from a collection of sources. It’s “truly shocking” and shameful, said U.N. High Commissioner for Human Rights Navi Pillay, who blamed the international community for inaction. “Collectively we have fiddled at the edges while Syria burns,” she said. “While many details remain unclear, there can be no justification for the massive scale of the killing highlighted by this analysis.” Inside Syria, anti-government activists brought their personal perspective to the new death estimate: “No wonder!” Hama activist Mousab Alhamadee said. “We live on the ground and we see the massacres daily.” Western and Arab nations have denounced President Bashar al-Assad’s regime, but they have been been reluctant to intervene in hopes of ending the warfare. They haven’t been successful in forging tough action against Syria at the U.N. Security Council because of opposition from Russia and China, both of which have long had friendly relations with and economic ties to Damascus. While some countries have passed along weapons to the rebels, the larger world community has avoided being drawn into a war, fearing a bloody quagmire, such as the Vietnam War for the United States or the invasion of Afghanistan for the Russians. Echoing the fears of U.N.-Arab League envoy Lakhdar Brahimi, Pillay worried about more deaths “unless there is a quick resolution to the conflict. I fear thousands more will die or suffer terrible injuries as a result of those who harbor the obstinate belief that something can be achieved by more bloodshed, more torture and more mindless destruction,” she said. Pillay said the number of deaths is higher than expected. “This massive loss of life could have been avoided if the Syrian government had chosen to take a different path than one of ruthless suppression of what were initially peaceful and legitimate protests by unarmed civilians,” she said. “As the situation has continued to degenerate, increasing numbers have also been killed by anti-government armed groups, and there has been a proliferation of serious crimes including war crimes, and — most probably — crimes against humanity, by both sides.”