Syria: Light at the End of the Tunnel 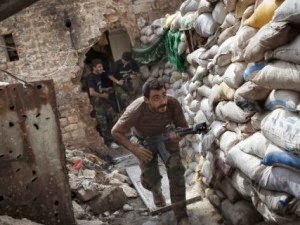 The city of Homs has finally been retaken by the Syrian Arab Army. The scenes of devastation left behind by nearly 3 years of fighting are surreal, but residents – who have begun returning in small numbers – vow to rebuild the city. Fighting concluded when the Syrian government granted a ceasefire to encircled militants occupying the city’s center.

An estimated 2,000 militants evacuated the city to rural positions where government forces will be able to engage them. Lacking the cover Homs’ urban terrain provided them, and without the well-entrenched positions and logistical lines they had established throughout fighting that began in 2011, militants stand little chance of continuing their campaign of violence, let alone returning to Homs.

Indeed, Homs – considered by the West who has sponsored the militants, as the “capital of the revolution” – is a symbol of what is to come across the rest of Syria. Similar ceasefires will alleviate urban centers that had been invaded and occupied by militants – many of whom are not even Syrian – and push the fighting into Syria’s rural regions where those that insist on continuing hostilities will be systematically eliminated by Syrian security forces.

As Syria approaches the end of wide-scale conflict that began in 2011 under the cover of US-engineered political destabilization and foreign-sponsored terrorism, it will be important for the Syrian government to recognize political opposition who had refrained from subversion and violence to address grievances and help move Syria forward and beyond attempts to divide and destroy the nation. However, attempts by the West to claim Syria is “divided” are patently false. Had Syria been truly divided, it is unlikely the government in Damascus would have weathered the nation-wide conflict, which included several sorties by Israeli warplanes directly on Damascus, as well as high-level assassinations, economic warfare, and a steady stream of billions of dollars in arms and equipment over Syria’s borders in the hands of foreign terrorists, facilitated by NATO and its regional partners.
The war in Syria is not over, but a light can be seen at the end of the tunnel. Syria’s ability to thwart NATO’s ambitions within and along its borders will translate to a loss of legitimacy and momentum elsewhere for NATO in the region and around the world. Syria and its allies must continue to resist and more importantly, successfully rebuild the nation stronger both domestically, and in regards to its ties internationally, once the conflict is concluded.

Other nations must take note of both Syria’s successes and initial failures. This includes Syria’s inability to communicate its side of the story to global audiences, relying almost entirely on Russia’s RT, Iran’s PressTV, and a growing alternative media that did include many capable Syrians. Both Syria and other nations around the world resisting foreign destabilization, must develop professional media networks able to communicate to international audiences to undermine if not entirely block attempts by foreign interests to hijack and control their respective national agendas.

Additionally, as seen in Egypt, attempts to use “pro-democracy” protests as cover for widespread armed terrorist campaigns, must be confronted immediately and decisively. Syria’s hesitation before and during 2011, in fear of attracting international condemnation, allowed terrorists a window of opportunity to build up their logistical and tactical capabilities behind the cover of so-called opposition movements like Syria’s Muslim Brotherhood. It could be argued that in 2011, global opinion would have prevented such a decisive move by Damascus and opened the door to early foreign intervention as was seen in Libya. Today, however, Syria’s sacrifices have opened the door for other nations to move without hesitation against similar ploys.

The West is Overreaching

The so-called “Arab Spring” in 2011 was the beginning of one of the most ambitious hegemonic geopolitical reorderings in modern history. However, in an age where word spreads at the speed of light, engineered subversion peddled as popular unrest possessed a very limited lifespan, one the West grossly exceeded in its attempts to reorder nations from Libya, to Syria, Iran, and even Russia and China. The result was the very public exposure of the West’s regime-change industrial complex, complete with faux-NGOs, its human rights racket, and the inner workings of its covert military operations everywhere from Libya to Syria, and even snipers brought in by Ukraine’s “Euromaidan” mobs.

The West committed so much along such a broad arch that should it fail, it stands to lose everything. From Libya to Ukraine, it appears indeed the West is failing. Just as other hegemonic powers have done in the past in their bid for global domination, the West’s current posture is one of overreaching politically, strategically, and even culturally. The growing backlash is compounded by the West’s inability to concede defeat, or even partial defeat and withdrawal. Just as Adolf Hitler’s Blitzkrieg, the West’s global arch of chaos will end inevitably in failure with a host of enemies following it when it finally has no other choice but to retreat back to its own doorstep.

The West’s failure in Syria is not an isolated event. Under the scrutiny of an increasingly aware global audience, what the West has attempted in Iraq, Libya, and now Syria, will cost it immensely when next it tries to subvert the political order of a foreign nation. In Ukraine now, this is demonstrated very clearly.

For a nation like Syria, the West’s well-earned distrust across the remainder of the globe will translate into an extra layer of protection during the closing stages of its current battle, and against future attempts to subvert and destroy its sovereignty and existing political order. The light is at the end of the tunnel for Syria, but to ensure it, and other nations emerge out the other end, they must take to heart the lessons learned from the US-engineered “Arab Spring” and begin laying the foundation of a multipolar world capable of not only resisting unipolar ambitions, but stopping them entirely before they lay waste to yet another nation.