A new and deadly strain of bird flu is threatening two eastern Chinese provinces, with health authorities and virologists suspecting that a virus mutation is the link between the dead pigs that floated past Shanghai, dead migratory birds in north China, and the deaths of three people.

Two new cases of H7N9 bird flu, one of them fatal, have been reported in east China’s Zhejiang Province, bringing the total number of infections in the country to nine, according to a report by Chinese regime’s state media Xinhua.

Seven other H7N9 bird flu cases had been reported previously, with two people dying in Shanghai, one critical case in Anhui and four critical cases in Jiangsu, according to the report. 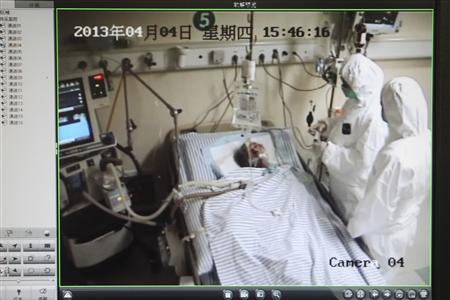 April 5, 2013 – CHINA – Beijing said it was mobilizing resources nationwide to combat a new strain of bird flu that has killed six people, as Japan and Hong Kong stepped up vigilance and the United States said it was closely monitoring the situation. All of the 14 reported infections from the H7N9 bird flu strain have been in eastern China and at least four of the six dead are in the financial hub of Shanghai, a city of 20 million people.

The strain does not appear to be transmitted from human to human but authorities in Hong Kong raised a preliminary alert and said they were taking precautions at the airport. Vietnam banned imports of Chinese poultry. In Japan, airports have put up posters at entry points warning all passengers from China to seek medical attention if they have flu-like symptoms. A total of 14 people in China have been confirmed to have contracted H7N9, all in the east of the country. One of the cases was a four-year-old child, who was recovering, the official Xinhua news agency said. Hong Kong authorities said six people had died. Authorities in Shanghai also discovered the H7N9 virus in a pigeon sample taken from a traditional wholesale market, Xinhua added, believed to be the first time the virus has been discovered in an animal in China since the outbreak began.

In the United States, the White House said it was monitoring the situation and the Centers for Disease Control and Prevention (CDC) said it had started work on a vaccine if it was needed. It would take five to six months to begin commercial production. But the groundwork is being laid. The virus has been shared with World Health Organization (WHO) collaborating centers in Atlanta, Beijing, London, Melbourne and Tokyo, and these groups are analyzing samples to identify the best candidate to be used for the manufacture of vaccine – if it becomes necessary. Any decision to mass-produce vaccines against H7N9 flu will not be taken lightly, since it will mean sacrificing production of seasonal shots. That could mean shortages of vaccine against the normal seasonal flu which, while not serious for most people, still costs thousands of lives. Sanofi Pasteur, the world’s largest flu vaccine manufacturer, said it was in continuous contact with the WHO through the International Federation of Pharmaceutical Manufacturers and Associations (IFPMA), but it was too soon to know the significance of the Chinese cases.

Other leading flu vaccine makers include GlaxoSmithKline and Novartis Preliminary test results suggest the new flu strain responds to treatment with Roche’s drug Tamiflu and GSK’s Relenza, according to the WHO. With the fear that a SARS-like epidemic could re-emerge, China said it was pulling out the stops to combat the virus.