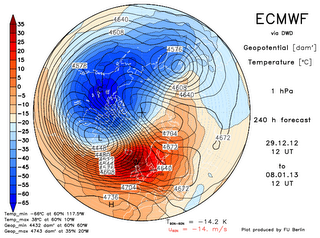 January 1, 2013 – CLIMATE – The weather outside was truly frightful across much of the US and UK this holiday season. In the US, a powerful winter storm whipped up heavy snow, icy winds and a record number of tornadoes in late December, causing at least 15 deaths. Such storms are not unusual at this time of year, but an especially strong jet stream made the storm more intense, says meteorologist Greg Carbin of the US National Weather Service. “One of the more remarkable places was Little Rock, Arkansas,” says Carbin. “It shattered the prior record for snowfall on Christmas Day.” Little Rock, which hadn’t seen a white Christmas since 1926, was hit with more than 25 centimeters of snow. At the same time, warmer air mixing with the southern border of the system created thunderstorms along the Gulf Coast that spawned 34 tornadoes across four states. The storm then churned north-east, dumping 30 cm of snow or slushy mix on parts of the Midwest and New England. Thankfully the storm was fairly fast moving. “It was pretty much a one-day event in any region of the country,” says Carbin. In the UK, heavy rain saw many rivers burst their banks and roads and railway lines washed away. It is the inevitable end to what looks like being the soggiest year since records began.

The most popular reasons why Malaysians date Malaysian women is the fact that Malaysia is a host to amazing charm and exoticness. This may not be only the circumstance with the woman yet also the person who has a wonderful personality, good looks, charm http://gorich.lifelink.com.tw/2019/05/24/listen-you-your-partner-best-sites-to-meet-single-women/ and persona. Malaysia is well known for its issues and...