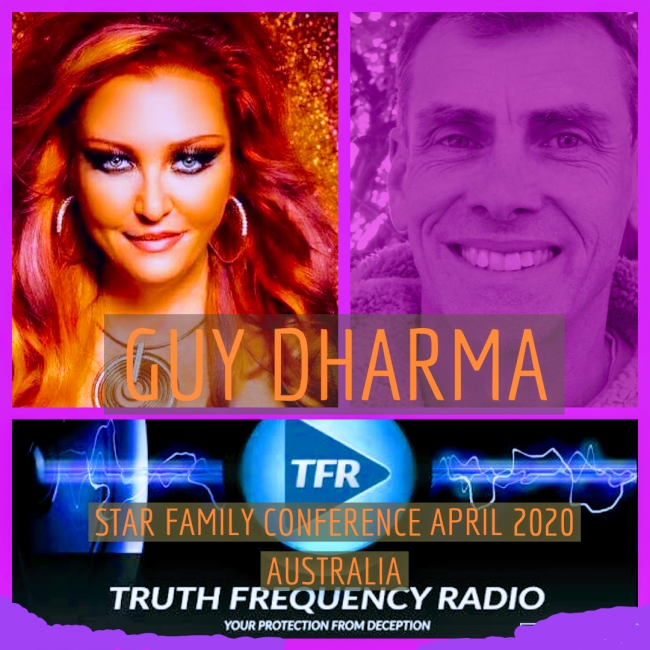 This week on The Nikki Colombo Show is Guy Dharma organiser of The Star Family Conference
3rd – 5th April 2020 Star Family Conference. Alternative knowledge. ET’s, Galactic Experiences. Spiritual, RYE, VICTORIA, AUSTRALIA …
GUY DHARMA
Guy has been taken on board craft since childhood, and has dream recall of being on craft, being taken to underground bases, being operated on, having missing time, and interacting with his hybrid children. Guy visited the ashram of Sri Sathya Sai Baba in India five times over a period of twenty years, where he experienced states of bliss and witnessed miracles. Guy has intensively and extensively researched all things spiritual, new age, paranormal, conspiracy, cryptozoology, forbidden history, and off world/ET for a quarter of a century. Guy has had regular visitations from a large number of different E.T. beings who have wanted to connect with him. Guy does past life readings. He has been to forbidden history sites in Australia and N.Z. Guy holds a degree in Science with a major in zoology, has been around Australia twice, been on three scientific field expeditions, leading groups into the rainforest of Far North Queensland, and on other occasions he has dived with sharks and walked with komodo dragons.
www.youtube.com/pleiadianguy
About the Star Family Conference –
Human beings have been separated from their Extra-Terrestrial genetic and soul lineage for centuries. This event is a gathering of keynote speakers, who through both research and personal experiences are uniting to present an alternative view on who we really are, who our Extra-Terrestrial family are, and our place in the Universe. OUR STELLAR SPEAKERS
We have a fantastic line up of speakers with a vast range of wisdom and experience in their chosen field, each with their own understanding of our kinship with the stars.
​
We have famous speakers flying in from interstate. Richard Patterson is the premier authority on Australia’s own Stonehenge at Mullumbimby. Paulina Howfield is a global shaman with decades of wisdom and experience.
Our home grown talent matches up strongly. We have our own shining starseeds in Nikki Colombo, Luise Duffy and Cosmic Angel Michele Kingston, ET communicator Solreta Antaria, Spiritual Mentors Fiona Lee and Layanda, Radio Presenter and Psychic Steve Myers, Walk-In Patricia Reise, sacred energy toolmaker Rod Bradshaw, Original man Lionel Lauch, Accomplished and internationally recognised Psychic Michelle Dharma and global conspiracy and paranormal expert Guy Dharma.