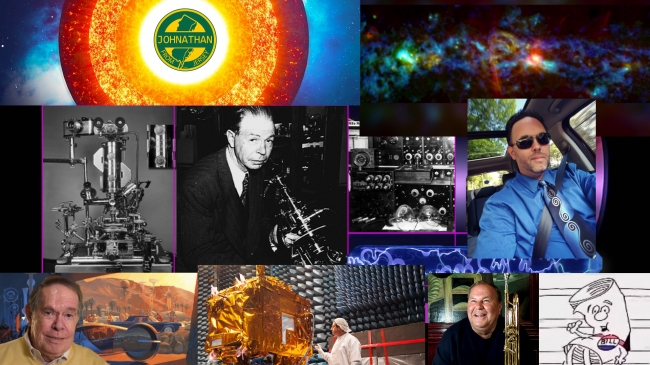 After a run of amazing guests over the last few weeks, we have let the lettuce-pile pile. So today we don our bibs, grab the proper fork, apply a dash of Iron, and dig in whole-heartedly! Ok…maybe half-heartedly. Sheesh, ok, ok, you got me…no heart at all here!! Just lettuce. And FIRE!! Lots of SPACE FIRE!! Walt predicts that in 2020, Space Fire will become the NEW Space Lettuce! We shall see…
–Zack wants to drop magnets…spin ’em, too. Sounds exciting!! But, Scientism beat ya to the drop, Zack! French physicists have done an experiment: the researchers buckled two metal cylinders inside a satellite called Microscope, launched them into low-Earth orbit, and measured how the cylinders fell around Earth for two years. Inside the satellite, they used glorified seat belts to secure the cylinders, each made of a different metal alloy. As the satellite hurtled 440 miles overhead, the smart seat belts measured the force required to keep each cylinder in place. Should one cylinder require more force to stay still, that would indicate its free-fall acceleration was faster than its neighbor’s. If a deviation in gravity existed, surely this years-long drop would reveal it. But it didn’t. The physicists found that the two cylinders fell at identical rates, within two-trillionths of a percent of each other—confirming Einstein’s theory of gravity yet again with almost 100 times more precision than any prior experiment. “There was no deviation from general relativity,” says Hees. That was kind of a bummer. Man.
–Iron Snow?? Contradictions between seismic data and existing models of our planet’s molten insides have been hard to solve. So geologists are now reconsidering the existence of a fuzzy zone of mineral ‘snow’ gently falling from the bottom of the outer core. “Time will tell whether the iron-snow model of our core might have merit. It’s not just of academic interest either; we’re desperate to know how the engines deep under the surface churn out a magnetic field, feed volcanoes, and produce earthquakes.” “…we’re desperate to know how the engines deep under the surface churn out a magnetic field…” Ummmm…
–FLAMES! In SPACE!!! The Expedition 61 crew explored a variety of space phenomena including how flames spread in weightlessness. Commander Luca Parmitano of ESA (European Space Agency) set up the unique video camera this morning to record him and Koch as they worked on combustion research. The duo burned acrylic and fabric samples in the Microgravity Science Glovebox to help scientists understand how flames expand in space to increase fire safety. Is that smoke I smell…or the next trend in rinse & repeat space drivel?
–We lost Syd “Blade Runner” Mead and Jack “I’m Just A Bill” Sheldon over the last week. They will be missed.
–We get a call from Angelo, the trucker, who has a Sasquatch living in his backyard eating his Mandarin oranges. He then proceeds to easily switch gears when he realizes he has called-in to a flat-centric show and proceeds to apply a smacking in his own right! Non-globularists in the house!
–We get our next-to-last call from Johnathon From Jersey. We touch on spoken tongues, God-like powers are granted then rescinded, and Zack craftily slips out of JFJ’s snare!

Clown world in full swing, we dig deep, a little too deep too early for Walt, he is filling Liz’s cuss jar at a fantastic pace. Fetch, boy!! –eftupworld: ​”I will take you from among the heathen and place you in your own land” – God. Makes me think of flat earth. Our own land❤...