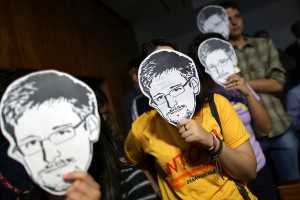 In a recent interview with New York Times journalist Peter Maas – The same NYT who’s website was also recently hacked to all hell, by the way, and yes we think it was the NSA – Edward Snowden basically told him that after 9/11, mainstream media journalists were cowardly traitors to true journalism (without actually saying that, of course, because that would be rude.)

After 9/11, many of the most important news outlets in America abdicated their role as a check to power — the journalistic responsibility to challenge the excesses of government — for fear of being seen as unpatriotic and punished in the market during a period of heightened nationalism. From a business perspective, this was the obvious strategy, but what benefited the institutions ended up costing the public dearly.

Yeah, I would say so. This is the same mainstream media who has lied to the public consistently for 12 years now, and they’re never going to completely stop. Unless maybe Rockefeller and Co. is having a change of heart, realizing that working with humanity instead of the uber-elite would be really good for both humanity and business right about now….nah. I think they don’t want rioting, they want to have control over the situation, but the recent successful hacking of their site could mean something else is going on behind the scenes. Stay tuned.