Sharks, and Tapirs, and Bears, Oh My! Animal Attacks On Humans On The Rise Globally

Ok, now that a second shark attack has occurred in Hawaii, things are looking a little odd now in the animal kingdom. The wildlife is starting to fight back against our oil pipelines, our deforestation, and our utter devastation of their water supplies by our fracking, nuclear, and geoengineering efforts, not to mention all the plastic crap floating around that those animals are exposed to in our oceans and riverbeds.

Today, CNN has reported that there have been 7 bear attacks just since last Thursday, and bear attacks in general have been on the rise for the last 6 months or so. Which is highly unusual, since bears (especially black bears) are usually afraid of humans and will run away when alerted to their presence.

… Bears rarely attack humans unless they feel threatened or territorial. But a 12-year-old girl jogging in Michigan is among the latest victims in a spate of bear attacks that have left seven people mauled in five states since Thursday. 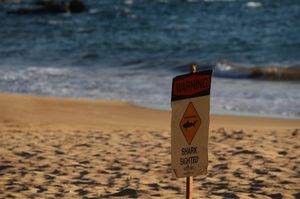 The massive increase in shark attacks worldwide has been, so far, unexplained. There are many theories, however: One assumes that the radiation from Fukushima and the dispersants used in the BP/Halliburton oil spill killed off most of their food supply, and despite their best efforts, they have been unable to find food “out there”, so they’ve resorted to the 3rd-easiest prey (behind dolphins, which are also beaching themselves in masse, by the way), which is us.

There were 26 shark attacks off the Florida coast last year, and 53 throughout the U.S., records show.

Authorities in France say it’s gotten so bad, they are considering a “cull” to kill off the sharks and protect the public against shark attacks.

At the Dublin Zoo a few weeks ago, a 2-year-old was savagely attacked by the so-called “usually docile creature” for no reason at all.

I honestly don’t know what to make of the sudden hostility from the fauna, but maybe they’re trying to tell us something about ourselves, or about the world, but maybe they’ve just been watching us for the last 100 years and are tired of seeing us treat each other and the planetary organism the way we do, and simply can’t stand it anymore.