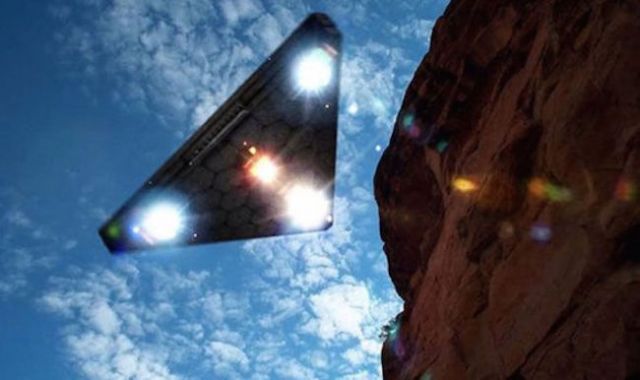 In the first video below, there is a craft that was spotted (and videotaped) on the surface of our moon.The craft appears to be a U.S. Black Budget craft known as a TR-3A which has its origins out of none other than Groom Lake in Nevada… otherwise known as Area 51. According to conspiracy theorists, the TR-3A Black Manta is a subsonic stealth spy plane designed by Northrop Grumman and was allegedly used in the Gulf War to guide F-117A Nighthawk bombers.

While I admit, I wouldn’t call the first video a smoking gun, the second video ABSOLUTELY lends credence to the theory that the triangle craft otherwise known as the military’s TR-3A absolutely DOES exist… OR… something else has been flying our friendly skies, if you catch my drift. Just after the 2 minute mark in the second video is a jaw dropping picture that is easily the best evidence I’ve ever seen that one of the two exist, assuming the picture has not been altered.

When you consider that a massive white tower structure perhaps 5 MILES HIGH was filmed on the Moon’s surface during the Apollo 16 flight, along with other footage that has recently come forth from the archives of NASA, it really makes a person wonder what is going on up there on our moon. In a recent post I talked about a documentary produced by the Sci-Fi channel titled, Aliens on the Moon: The Truth Exposed, and in that documentary even former Apollo Astronauts Buzz Aldrin and Edgar Mitchell weigh in on what they SAW on the moon and in space! The documentary is filled with authentic NASA footage that will make your head spin!

Continuing to add to the mystery of what is going on in the heavens, I recently wrote about the 3 MILE HIGH pyramids that were just filmed on the dwarf planet Ceres located between Mars and Jupiter as NASA’s Dawn spacecraft makes its descent toward the surface. The Dawn Spacecraft is scheduled to get closer to the surface of the dwarf planet than our own space station is to earth! Finally, there is still the question that has been haunting scientists for almost 100 years: What is the 13,000 year old satellite orbiting earth (otherwise known as the Black Knight) that has been transmitting a radio signal since at LEAST 1899 when Nikola Tesla was the first man to “intercept” the signal after building a high-voltage radio device in Colorado Springs. Since then, the USA and Soviet Union have shown particular interest in this “unidentified space object”