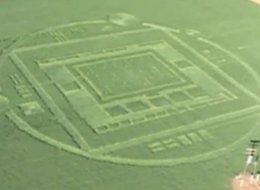 A crop circle that appeared mysteriously at a farm in Salinas, Calif., disappeared just as quickly, but not so mysteriously.

The intricate pattern — resembling a huge computer chip with dots in the middle — was discovered in a barley field on Monday, the Monterey Herald reports.

At first, Scott Anthony, who owns the land, hired security guards to keep thrill-seekers off the property. On Tuesday, he had the field plowed over.

Anthony was apparently unaware of how the circle showed up, according to the Monterey Herald.

The dots at the center of the design are a central part of the mystery. Braille experts told NBC Bay Area that the bizarre inscription has the number 192 over-and-over.

Some observers like Manuel Madrid were quick to declare the design proof of extraterrestrial intervention.

“I’m always willing to believe. It looks like aliens to me,” he told KSBW-TV.

“Dude, this is a crop circle,” said one of the men after they ran toward the light and allegedly discovered the flattened grass.

Others, like Jeffrey Wilson of the Independent Crop Circle Researchers Association, insist the Salinas crop circle is a hoax.

Wilson says the circle is too closely aligned with nearby roads. He speculates that the Braille-language dots and that YouTube clip could be a bizarre attempt at marketing.

Wilson said the circle is similar to the work of Circlemakers.org, a professional crop circle-making group that has done work for the BBC, Nike, History Channel and others.