Risk of Tornadoes and Severe Weather Looms Over Plains and South Large hail and damaging winds are on the horizon for at least 77 million residents of the American Plains and South, where a tornado-spawning storm system is expected to cut a path from South Dakota to Louisiana starting Sunday.

Although twisters will threaten a “broad area” beginning Sunday afternoon through Tuesday, the dangerous weather will be most concentrated over Missouri, Arkansas, eastern Texas and Louisiana, said Mark Ressler, a lead meteorologist with The Weather Channel. 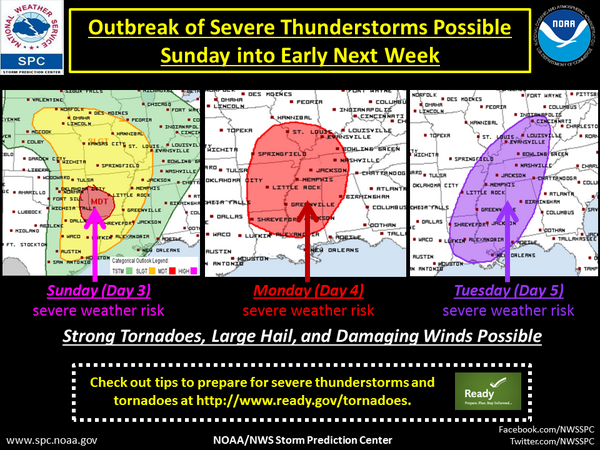 The tornadoes in these areas will have a “longer track,” Ressler said, meaning they have the potential to create a greater trail of damage.

The tornadoes will be accompanied with severe thunderstorms and heavy rain, adding a risk of flash flooding, according to Weather.com.

The storm will take a break on Monday morning, but because it is “slow-moving,” the same disastrous system won’t just disappear. Instead, it will move east and bring possible twisters, hail and damaging winds to the Mississippi River Valley through the Gulf of Mexico, said Russell Schneider, director at the NOAA National Weather Service storm prediction center.

Ressler said these residents should keep an eye on forecasts.

“If there’s a warning for your county, that’s when you take cover,” he said.

North Carolina was already cleaning up from multiple tornadoes that hit the east section of the state Friday, leaving more than 200 homes damaged and at least 16 injured.

The imminent storm system is the first “multi-day, significant severe weather outbreak” of an otherwise calm 2014 tornado season, according to the National Weather Service.

But it likely won’t be the last.

“We had a very coolish spring so far,” Ressler said, but spring “tends to be more classic for producing a large amount and successive days of severe weather.”