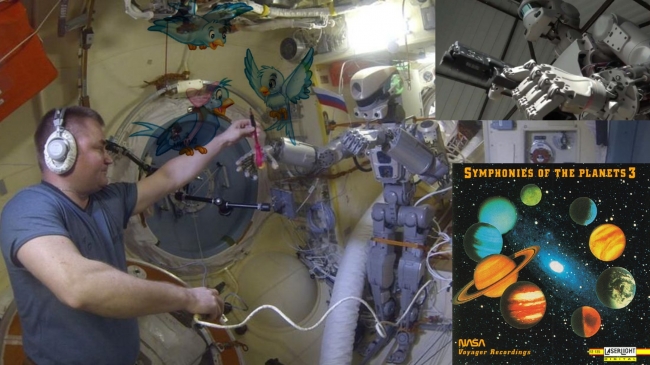 “You ain’t from ’round yere, are ya, boy?” We have a bit of a dust-up in chat this morning, what with new folks finding fault in our funk and all! We make peace, naturally, (it IS Ironworx, after all) and even nab an upcoming guest, who promises a life-changing presentation for a future (SOON!) show. While it is true we do get complacent in our knowledge that the world is filled with lies, and sometimes the lettuce pile gets a bit wilted, it was so awesome to have some push-back on a Friday! Thanx, Tarmo & Tisno(?).
–Meditation or flow? Zack and Walt hash out the finer points of finessing that still small voice…
–Dino deniers? Yup!
–Music of the sfears? Yup…
–This is TOO good not to include it all: “A Russian-built humanoid robot that flew to the International Space Station (ISS) has been removed from Twitter after insulting former cosmonauts and accusing them of drinking in space.
The space robot Fedor (Final Experimental Demonstration Object Research) served aboard the ISS for 10 days in August but was sent back to Earth after it proved incapable of performing a spacewalk.
Prior to its mission to the space station, former Russian deputy prime minister Dmitry Rogozin shared videos of Fedor appearing to show it driving a car, lifting weights, and shooting guns.
The life-sized robot, who is officially known as Skybot F-850, had an active social media presence but was abruptly removed following a barrage of tweets aimed at former cosmonauts Maxim Suraev and Alexander Samokutyayev, who now serve as lawmakers.
“Robots, unlike Suraev and Samokutyaev, are not susceptible to weaknesses, do not violate the dry law at the orbital station, do not speak nonsense, complete the flight task completely and without comment and do not seek to leave the cosmonaut corps for a place in the State Duma,” Fedor’s account tweeted.
“My opinion of people is low,” it added.”
…mine, too, Fedor…mine, too…
(Wait…is that a DRILL being handed to Fedor???)