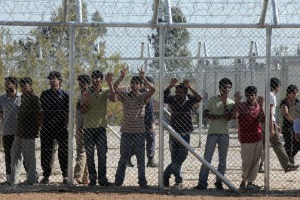 Protests over the weekend by immigrant workers in Greece highlight growing state violence against immigrants throughout Europe.

On Saturday evening, dozens of immigrants at the Amygdaleza detention centre near Athens refused to return to their sleeping quarters and set fire to their mattresses. The inmates were protesting against the inhumane conditions prevailing in the camp and a decision allowing their detention to be extended by 12 to 18 months.

According to one media report, electricity at the camp had been cut off a number of days previously. This suggests a deliberate provocation by state authorities.

Inmates threw water bottles and stones at police, who stormed the camp using teargas and stun grenades. After prolonged clashes, the police then arrested over 50 of the 1,620 immigrants in the camp.

The Amygdaleza detention centre, located next to a police academy at the foot of Mount Parnitha, has been criticized by human rights organizations for its abominable treatment of refugees. Photos of the camp show young detainees standing behind two-metre high fences topped with layers of razor wire.