Protest in Turkey Continues To Flare Up – Government Ups The Ante 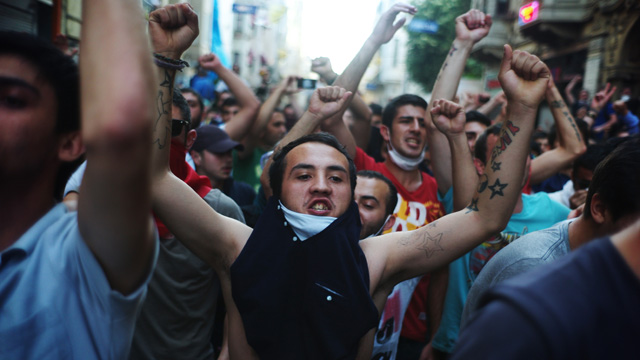 Taksim Square – Over 900 arrests have been made as police continue to fight the voice of the people. Just as any oppressive government does, rather than listen to what the people are demanding they simply use brute force to intimidate others from joining any movement.

The protests started as a peaceful protest against something as simple as removing park trees. Because the police responded with brutal force, it has mounted into one of the largest protests Turkey has ever seen, and the focus has shifted to protesting police brutality. As our long-gone President Kennedy used to say, “Those who make peaceful revolution impossible make violent revolution inevitable”.

As someone who has studied the “problem, reaction solution” extensively, I can’t help but wonder if this is another government agenda to bring in an even bigger police state. I don’t know too much about the Turkish government but I know that the majority of violent protests have been funded and backed by organizations like the National Endowment For Democracy.

In a nutshell the agenda goes like this: The Western governments decide they want to destabilize a region. They funnel money through this “non-governmental” agency (headed by John McCain, George Bush, Sr. and others of the like), then they go in with UN “peace-keeping” troops. On the surface NED is not a government agency, so they are allowed to “fund rebels” without Congressional or political repercussions just like Google and Facebook is not bound by the constitution because users opt- in for this “private” service and agree to the terms and conditions.

I’m not saying this was an orchestrated protest, not by any means. I’ve been so neck deep in the UK false flag and other alike that I haven’t been able to keep an eye on anything else. So there is still much research to be done. However it’s important for everyone looking at geopolitical situations to think from all perspectives and find deception where it is, lest YOU fall for a deceptive plot and manipulated into your own demise.