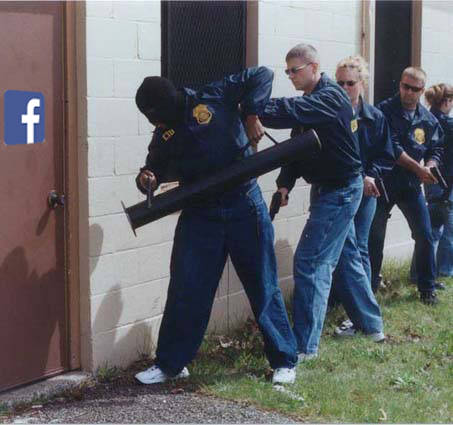 Unfortunately, it appears that the lure of bulk surveillance is not just a temptation for the federal government. Last summer, about a month after new leaks exposed the NSA’s bulk content PRISM program, Cyrus Vance, Jr., the District Attorney for Manhattan, decided to go secretly fishing through 381 Facebook accounts, and wanted to ensure no one was allowed to stop him.

The DA was looking for evidence of disability fraud, and saw Facebook as a treasure trove. Many people put their lives online, sharing their daily ups and downs with a steady stream of photos, comments, and wall posts to friends and family. Perhaps some of them, after claiming a disability, would post a windsurfing selfie or write about their marathon training, and evidence their fraud.

So the DA put together nearly 400 search warrants, which ordered Facebook to provide near total access to the accounts, and gagged the social media giant from informing the users. Facebook reports that this “unprecedented request is by far the largest we’ve ever received—by a magnitude of more than ten.” According to Facebook’s appeals brief, the targets included a cross-section of America “from high schoolers to grandparents, … electricians, school teachers, and members of our armed services.”

Facebook’s brief explains that the warrants sought “information that cannot possibly be relevant to the crimes the Government presumably continues to investigate,” including what “Group” people belong to (and who else is in that group), chat messages, private messages, friends list (including removed friends) and even past and future events.  And indeed, for the vast majority of the target, the information was not relevant to any crime.  Only 62 people were ultimately charged.

Sometimes “come back with a warrant” is not enough. The warrant must also conform to constitutional limitations, narrowly seeking evidence of a crime with particularity, based on probable cause. It is not a license for the government to rifle through the private lives of anyone it suspects. As the Supreme Court recognized just yesterday, the Fourth Amendment was the founding generation’s response to the reviled “general warrants” and “writs of assistance” of the colonial era, which allowed British officers to rummage through homes in an unrestrained search for evidence of criminal activity.

Facebook rightly challenged this overboard pile of warrants. Indeed, it was the only entity who could. The gag order prevented Facebook from giving notice, so none of the users was in a position to assert their constitutional rights, or even know those rights were in danger

Nevertheless, the DA disputed Facebook’s right to challenge the warrant in court, and the New York state trial court agreed, holding that “it is the Facebook subscribers who could assert an expectation of privacy in their posting, not the digital storage facility, or Facebook.” The court reasoned that this wouldn’t be a problem, because a criminal defendant could move to suppress the evidence before trial.

But what about the users who are never charged? The court never grapples with that issue, perhaps not realizing that ultimately 80% would not be the fraudsters the DA was looking for. Instead, the opinion moves on to justify the non-disclosure provisions by raising the spectre of evidence tampering by the users.

Under this pair of holdings, no one is allowed to challenge the authority of the DA in court.

Facebook is not allowed and the users don’t know. (Ironically, in an earlier case involving Twitter, the court had found that the user had no rights to challenge the NY DA’s data demand on Twitter). To paraphrase yesterday’s landmark Supreme Court ruling, the Founders did not fight a revolution to gain Fourth Amendment rights that no one can assert.

Facebook has appealed this dangerous precedent, seeking to “invalidate these sweeping warrants and to force the government to return the data it has seized and retained.” And, nearly a year after the warrants issued, the case has been unsealed. But, despite a temporary stay, Facebook was eventually forced to comply, and the DA continues to hold a digital dossier of the lives of over 300 people never charged with a crime.

Facebook’s appeal is well grounded. The Stored Communications Act, upon which the court relied to issue the warrants, specifically allows for service providers to challenge court orders. On the merits, the overly broad warrants go beyond what the Constitution permits by failing to identify with particularity the criminal evidence to be seized, and failing to put in place procedures to protect the privacy of the people whose lives were invaded by the government.

The information cannot be undisclosed, but the New York appeals court can still help right this wrong by overturning the erroneous criminal court decision, quashing the warrants and requiring the DA to destroy the ill-gotten evidence.

Please visit the Electronic Frontier Foundation, where this article first appeared, for the latest news in digital privacy.