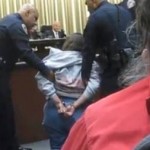 The over-bearing police state and the complete disregard for inherent rights has upped itself a notch in the textbook of oppression.

According to the article:

“A Riverside woman is facing misdemeanor charges following her arrest for speaking too long at a Riverside City Council meeting, the Riverside Press-Enterprise reported Thursday.”

The article went on to read:

“Karen Wright, whose arrest was videotaped and obtained by the paper, was cited for disrupting a public meeting Tuesday night.

“The incident unfolded after Wright exceeded her allotted three minutes to speak at the lectern while commenting on a sludge hauling contract,” the paper reported.”

It is said that the public servants or, more commonly known as “city officials,” sitting within the city council chambers did not order for her arrest.

The question arises, who ordered for her arrest? And do they have a firm understanding of the first amendment?

It seems as if the city’s representatives and cops do not understand of the first amendment. If they had an understanding this 60-year old lady would not have been detained for “speaking too long” at a city council meeting.

The blatant abrasion of our inherent rights is worsening each day with acts of terrorism like this unconstitutional arrest.

What is next? Being arrested for standing too long at a city council meeting?

Video of Karen Wright being arrested: