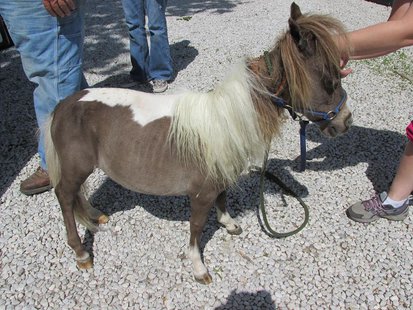 Two carnival workers en route from Florida to Chicago with two miniature horses in tow were arrested Monday in Sullivan County after police pulled their commercial vehicle over for a routine inspection and found the animals in poor health.

A trooper with the Indiana State Police Commercial Vehicle Enforcement Division stopped a white 1995 Ford pickup pulling a homemade enclosed trailer on U.S. 41 near Indiana 54 at 1:35 p.m., according to an ISP release.

The stop was for a routine inspection of the driver, truck, trailer and cargo, police said.

The trailer held two miniature horses, one male and one female, which appeared emaciated and in general poor health. In addition, there was neither water, food or sufficient air flow through the trailer, according to Senior Trooper Byron Goodman.

Sullivan County Humane Society was called and took the horses to the Sullivan County Animal Hospital for treatment. The animals will be held there until further notice, police said.

Sullivan County is on the western edge of Indiana, between Vigo and Knox counties.

Arrested were Steven Toth Jr., 21, of Davie, Fla., the driver of the truck, and Joel Baldwin, 43, address unknown, a passenger. Each was preliminarily charged with two counts of animal neglect and booked into the Sullivan County Jail.

Police said the carnival workers were employed by Modern Midways Carnival of Miami. The employees and horses were en route from Chadsworth, Ga., to Chicago.