The population at large is finally starting to wise up about breast cancer awareness, not so much as it pertains to the prevalence of the disease — you would have to be burrowed up in a hole day and night to not be aware of the existence of breast cancer these days — but rather in regards to how all the “Pink for the Cure” hysteria represents the total commercialization and corruption of the breast cancer industry. 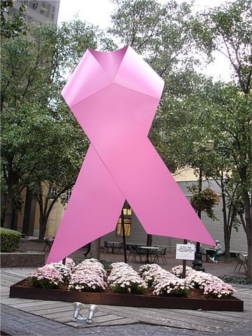 An increasing number of women are growing disillusioned with all the pink t-shirts, pink bracelets, pink hats, pink buckets of KFC chicken, pink alcoholic malt beverages, and other outlandish pink merchandise that has ingrained itself into popular culture. They are also getting tired of having the color pink thrown in their faces as a symbol of disease, not to mention one that has been corporatized to such an astounding degree that even professional sports players now don pink towels and shoes during corporate-sponsored games.

Sexualization of breast cancer illustrates lunacy of pink ribbon madness
Then there are all the not-so-subtle sexual references to “ta-tas,” “boobies,” and other crass and childish allusions to women’s breasts, which are enough to make any dignified breast cancer sufferer or survivor squirm with discomfort as they venture out in public. Some of the more juvenile catch phrases bearing sexual connotations say things like “I Heart Boobies” and “Save Second Base,” which can often be seen printed on t-shirts and tank tops worn by both men and women.

All this nonsense might be somewhat excusable if the Komen for the Cure “pink” efforts were actually making a real difference in preventing and curing breast cancer. But based on the available facts and figures, the only substantial change throughout the past decade has been an enormous transfer of wealth from compassionate, yet naive, donors to corporate interests promoting a disease brand rather than the discovery of any actual solutions.

It might not be popular to talk about, but the untold millions of dollars that have been donated to groups like Komen for the Cure since the company’s inception have not gotten us any closer to a cure for cancer, at least not a conventionally-accepted cure. Komen still does not even tell women about all the scientifically-proven foods and herbs that help prevent the development of breast cancer, let alone share any details about advancements in unconventional treatment methods such as the Gerson method or Dr. Burzynski’s antineoplastons.

Corporations whose products cause cancer are capitalizing on pink mania
Another major area of concern is the way pink products and labels have been adopted by the very companies and corporations whose products are linked to causing cancer in the first place. KFC’s ridiculous “Buckets for the Cure” campaign, for example, is hugely inappropriate in light of the fact that the chain’s fried chicken is filled with cancer-causing acrylamides, genetically-modified organisms (GMOs), and other toxic chemicals.

Simply put, there is a lot of money to be made from capitalizing on cancer, as morbid as it might sound to some. Non-profit groups like Komen for the Cure and LIVESTRONG, not to mention the entire multi-billion-dollar cancer industry, would not exist if effective cures and prevention methods were widely disseminated to the general public. Just think about what would happen to all that pink gear if women were given even simple cancer prevention guidelines that included things like avoiding toxic bisphenol-A (BPA) and estrogen-producing soy products, for instance, and instead taking cancer-preventing superfoods and herbal supplements.