According to CNN, the death toll is now at 17. Reuters reported earlier that more than 250 have been rescued: 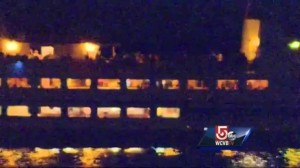 MANILA (Reuters) – Thirteen people died and 690 were rescued after a ferry sank following a collision with a cargo vessel in the central Philippines, a coastguard commander said.

“We don’t know if there are still people missing,” Rear Admiral Luis Tuason told local radio early on Saturday, citing a discrepancy between the actual numbers killed or rescued and the ferry’s manifest, which showed 692 crew and passengers on board.

The 40-year-old ferry St Thomas of Aquinas is allowed to carry up to 904 passengers.

Tuason said the cargo vessel Sulpicio 7 was on its way to Davao when it collided with the ferry from Mindanao, which was supposed to pick up more passengers in Cebu before proceeding to Manila.

“Passengers jumped over board after the ferry listed but it was too dark and that made it difficult to find people in the water,” Tuason said.