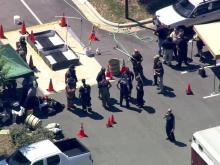 UPS delivered the package between 11 a.m. and 2 p.m. Monday to the U.S. Bureau of Citizen & Immigration Services office, at 301 Roycroft Drive. One employee said she felt nauseated and went home, police said.

On Tuesday, the employee returned to work, and she and two co-workers became ill, police said.

Police described the package as an envelope with an oily residue.

“We don’t know what could be inside, and we don’t know what the mindset of a person could be. With that, we have to make sure that safety comes first,” said Capt. D.C. Allen of the Durham Police Department.

Authorities isolated the package and evacuated the building.

“We do know that there were no threats or anything that was attached to the package, and we do at this point have an idea where the package originated,” Allen said.