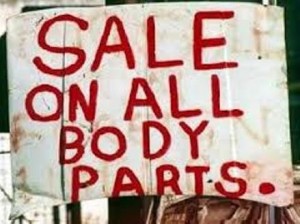 Unlike the terrorist offenses in Libya, Syria, and now Iraq, backed by the United States, the UK, the EU, members of NATO as well as regional collaborators such as Saudi Arabia, Israel, and Qatar, where any attempts to stop extremists from seizing entire nations is met by the West’s howling indignation and accusations of “human rights abuses,” the unmitigated brutality executed by literal Nazis in Ukraine against breakaway provinces in the east are accompanied by a hypocritical silence from the West. Refugees streaming away from encircled and bombarded populated centers tell tales of mass murder, indiscriminate targeting of civilians, and even grisly accounts of forced organ harvesting taking place from the bodies of those killed by Kiev’s combined arms offensive, or from those kidnapped by criminal gangs operating in the vacuum of impunity afforded by the West’s silence.

Unlike in Libya, Syria, and now Iraq where the Western media eagerly reported “activist” accounts as unquestionable truth, and even participated in flagrant fabrications to justify further military intervention, particularly in Libya and Syria, networks like the BBC dismiss Ukrainian refugee accounts as hearsay not warranting any further investigation. In the BBC’s article, “The Ukrainian refugees escaping to Russia,” it states:

They claim that masses of Polish snipers have been shooting civilians, that children have been abducted and flown to America to have their organs removed, and that the Ukrainian army has been killing refugees who have been trying to escape.

There is no evidence to support any of these wild claims. But what they prove is a deep-seated mistrust of Kiev.

What could be considered more “wild” is the BBC’s outrageous hypocrisy, their lack of investigating claims – considering they claim to be journalists – and their lack of explanation as to just why the people of eastern Ukraine harbor a “deep-seated mistrust of Kiev.” Why would thousands of eastern Ukrainians, hostile or distrusting of Kiev, flee their homes in the first place had Kiev not been carrying out a policy of criminal brutality?

Russian sources tell a different story, explaining the details of the ongoing horror the BBC mentions in passing but failed to either qualify or dispel with anything resembling evidence. In Pravda’s article, “In Ukraine, human organs don’t stink,” it is reported that:

Shocking information appeared on the social networks saying that the militia from Slavyansk found hundreds of corpses of National Guard soldiers during a night reconnaissance operation. The soldiers had had their stomachs ripped open and internal organs removed. In addition, the people living in the troubled territories, have seen well-equipped ambulance vehicles, armored cash collection vans and other special vehicles near hospitals of the Ukrainian army.Employees of international airports, for example, in Boryspil, said that there were many small aircraft chartered to transport special refrigerators that are used for transporting human organs. These would be the same “social networks” frequently cited by the Western media to substantiate claims made against the targeted governments of Libya and Syria. Now that Western interests are backing a regime trying to consolidate its power against armed fighters, such stories are “wild” and unworthy of further investigation. Pravda notes that the impoverished state of Ukraine’s military – unable to provide even matching uniforms or food – makes the increased medical presence around Kiev’s forces very unlikely the result of interest in preserving the well-being of both its own fighters as well as those caught in their path.

Instead, considering the immense corruption and lawlessness that existed even before the so-called “Euromaidan” and the rise of an ultra-right client regime operating in utter disarray, it is more likely organ harvesting for profit is taking place. Eastern Europe has been one of several global epicenters for forced organ harvesting for years. A November 2011 Bloomberg article titled, “Organ Gangs Force Poor to Sell Kidneys for Desperate Israelis,” reported that:

Investigators on five continents say they have uncovered intertwining criminal rings run by Israelis and eastern Europeans that move people across borders — sometimes against their will — to sell a kidney.

“The criminal here is the middleman who profits from the sick and the poor,” says Bahat, who investigated an organ- trafficking ring in Jerusalem. “It touches my heart that people will sell part of their body because they need money to live.”

Criminals see an opportunity to make big money in the organ trade, where they can sell a kidney for 15 to 20 times what they pay, police throughout Europe say.

“They recognize the obscene profit that can be made in the expanding black market in body parts,” says Jonathan Ratel, a Pristina, Kosovo-based prosecutor who has been investigating organ trafficking over the past two years. “It keeps happening because there is so much money in this.”

In fact, amid the chaos of Ukraine’s armed conflict, it would be unthinkable that these same criminal gangs would not be scouring the battlefields and hospitals for potential victims. The BBC’s failure to investigate the very plausible claims of desperate refugees suggests both utter journalistic incompetence and even complicity in covering up atrocities being committed as part of Kiev’s brutal, unwarranted, and deadly bid to consolidate power.

The state of forced organ harvesting as described by Bloomberg in 2011 implicated criminal gangs in Ukraine specifically, as have other reports. Ukrainian hospitals and doctors have been long-implicated as well. How then does the BBC call accounts of organ harvesting “wild claims” when nothing has been done to stop such practices since 2011, and especially with conditions in Ukraine today setting the stage for such criminality to flourish unchecked?

Just as the ultra-right taking power in Kiev signifies the resurgence of Nazism in Europe, fully backed by the European Union and NATO, the covering up of forced organ harvesting and other horrors is torn straight from the playbook of Adolf Hitler’s Nazis, including the likes of the notorious Josef Mengele. History is repeating itself, specifically because of the ignorance of Western audiences and the complicity of journalists charged with reporting the truth who instead, bury it under propaganda.

Since organ harvesting is undoubtedly taking place in Ukraine today – since it was taking place on record before the conflict even began – the BBC’s dismissal of this tale of horror may mean Polish snipers supported by NATO may also be carrying out atrocities, and the regime of Petro Poroshenko may very well be carrying out campaigns of racially motivated genocide.