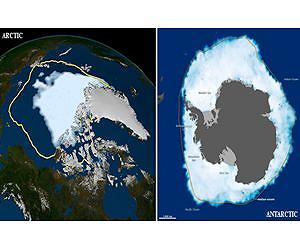 October 27, 2012 – CLIMATE – The steady and dramatic decline in the sea ice cover of the Arctic Ocean over the last three decades has become a focus of media and public attention. At the opposite end of the Earth, however, something more complex is happening.

A new NASA study shows that from 1978 to 2010 the total extent of sea ice surrounding Antarctica in the Southern Ocean grew by roughly 6,600 square miles every year, an area larger than the state of Connecticut. And previous research by the same authors indicates that this rate of increase has recently accelerated, up from an average rate of almost 4,300 square miles per year from 1978 to 2006.

“There’s been an overall increase in the sea ice cover in the Antarctic, which is the opposite of what is happening in the Arctic,” said lead author Claire Parkinson, a climate scientist with NASA’s Goddard Space Flight Center, Greenbelt, Md. “However, this growth rate is not nearly as large as the decrease in the Arctic.”

The Earth’s poles have very different geographies. The Arctic Ocean is surrounded by North America, Greenland and Eurasia. These large landmasses trap most of the sea ice, which builds up and retreats with each yearly freeze-and-melt cycle. But a large fraction of the older, thicker Arctic sea ice has disappeared over the last three decades. The shrinking summer ice cover has exposed dark ocean water that absorbs sunlight and warms up, leading to more ice loss.

On the opposite side of the planet, Antarctica is a continent circled by open waters that let sea ice expand during the winter but also offer less shelter during the melt season. Most of the Southern Ocean’s frozen cover grows and retreats every year, leading to little perennial sea ice in Antarctica. Using passive-microwave data from NASA’s Nimbus 7 satellite and several Department of Defense meteorological satellites, Parkinson and colleague Don Cavalieri showed that sea ice changes were not uniform around Antarctica.Most of the growth from 1978 to 2010 occurred in the Ross Sea, which gained a little under 5,300 square miles of sea ice per year, with more modest increases in the Weddell Sea and Indian Ocean.

At the same time, the region of the Bellingshausen and Amundsen Seas lost an average of about 3,200 square miles of ice every year. Parkinson and Cavalieri said that the mixed pattern of ice growth and ice loss around the Southern Ocean could be due to changes in atmospheric circulation. Recent research points at the depleted ozone layer over Antarctica as a possible culprit. Ozone absorbs solar energy, so a lower concentration of this molecule can lead to a cooling of the stratosphere (the layer between six and 30 miles above the Earth’s surface) over Antarctica.

At the same time, the temperate latitudes have been warming, and the differential in temperatures has strengthened the circumpolar winds flowing over the Ross Ice Shelf. “Winds off the Ross Ice Shelf are getting stronger and stronger, and that causes the sea ice to be pushed off the coast, which generates areas of open water, polynyas,” said Josefino Comiso, a senior scientist at NASA Goddard. –Space Daily

“The Arctic Ice sheet’s albedo ratio diminishes, as the size of the Arctic ice cap shrinks. The whole runaway process compromises the system further. At the other end of the globe; nearly the opposite effect occurs. Plunging temperatures increases the density of the Antarctica ice shelf- and the danger rises not from sublimation; but from massive fracturing and the seismic slippage of large ice sheets, as sub-glacial volcanism intensifies.” –The Extinction Protocol, p. 126

(HealthNewsDigest.com) – It is true that on September 16, 2012 the world reached a new low: The National Snow and Ice Data Center (NSIDC) reported that the extent of sea ice across the Arctic was at its lowest since satellite record-keeping began in 1979. On that date the sea ice reached its summer minimum, 1.32 million square miles, half of what the average size of summer ice was between 1979 and 2000, and almost 20 percent lower than the previous record minimum of 1.61 million square miles set on Sept. 18, 2007. NSIDC added that, despite especially warm conditions in 2007 being much more favorable for sea ice loss than this year, the thinning of sea ice due to climate change has made the ice more vulnerable to breakup and melting.

Meanwhile, researchers with the European Space Agency’s CryoSat-2 probe reported in August that beyond the loss of sea-ice extent, the thickness and volume of the ice has also been declining significantly faster than expected. They found just 1,679 cubic miles this past summer as compared to 3,118 cubic miles in the summer of 2004. They anticipate that the Arctic could be ice-free in the summer for a day or more by the end of the decade.

The implications of such melting are potentially immense. For starters, wildlife like polar bears, seals and walruses depend on sea ice for their survival; their habitat is literally being pulled out from under them. Polar bears were added to the federal Endangered Species List in 2008 for this very reason in what environmentalists herald as a great victory in that the federal government officially recognized the existence of global warming and would therefore be able to take more decisive action to rein in carbon pollution—of course, that part of the dream has yet to be realized.

Perhaps even more alarming is the fact that melting sea ice and accelerating Arctic warming spur changes in the jet stream that increase the frequency of weather extremes like droughts, floods, heat waves and cold spells in the mid-latitude regions of the Northern Hemisphere. The fact that 2012 has been a scorcher all around—July was the hottest month on record, with two-thirds of the U.S. in drought, wildfires running rampant and half the counties in the country designated as federal disaster areas—only makes the connection between carbon pollution and the greenhouse effect all the more apparent.