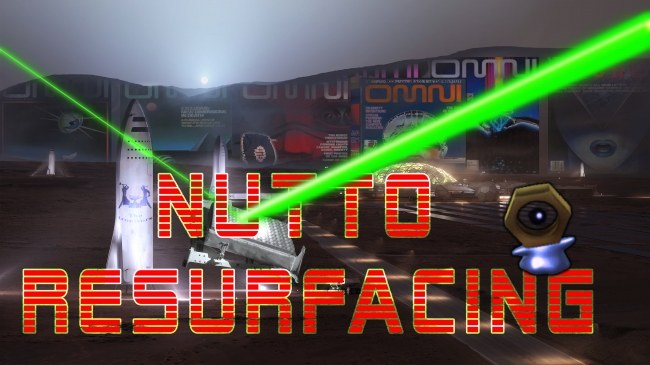 As we gear up to make minor show changes across The Iron Realm (a”resurfacing” in Josh’s vernacular!), a new, NEVER BEFORE SEEN, beyond mysterious Pokemon has caused quite an uproar across social media. As Walt and his Pkoe Krewe wrapped up this past weekend’s less than stellar Community Day (Rotten Banana Shinies…meh), poor little Chicorita suddenly had all his Pokethunder stolen by a “new” ‘mon named “???” Found hidden within the game code by date-miner CHRALES the day before, it’s dubbed Pokemon 891, a/k/a Squishy Nut, Nut Face, DittoNut and our FAVE, Nutto! It was EVERYWHERE for a full 30 minutes after the Day ended, all nearby Pokestops had one, ALL of them, and as a community gasped in unison, nationwide, we all scrambled to “CATCH IT! CATCH IT!! WHAT IS IT???”…only to see the all too familiar “OH?” screen appears, crestfallen as our new acquisition transforms into that good ole blank-eyed bozo Ditto…er, um, HUH?? 30 minutes later…gone…or is it???
–A laser shining on the dark part of the Moon from Earth…will you see a dot? NO! A thousand lasers? NO! A million? NO! One…from NASA?? Well, Duh!!! Haven’t you seen the infamous Space Reflector that we left on the moon, along with dick pics, metal figurines, Masonic flags, etc?? Look here:https://qph.fs.quoracdn.net/main-qimg-20f8d34d8d12564d84bc7e3ebe1cdc93.webp. Laugh here: “Dub_C : Objects in reflector may be closer than they appear.
syllamo : citizens may appear more intelligent than they actually are.”
–Were/are you a HUGE science geek? Us, too! So naturally, you read and fondly remember OMNI Magazine! Us, too!! A nostalgic remembrance…
–Full moon power up, GO!
–Well, we Humans have managed to find a NEW way to suck…we’ve caused the Earth to wobble in its axis…GREAT, way to go, guys. Let’s mess up Mars next…friggin’ humans…

We hear from an old friend today, Johnathan! He has traveled, riding the storm out, if you will. He has plans, with another friend of the Realm…but listen to him tell it… –We dig into the lettuce pile, and it is DEEEEEP!! –Ex-FEers?? There WAS one?? –We do The Robot!!! #DiscoLives –We can now check...

Yeah, guarantee that title is sure to leave a few of you with lasting mental scars, but compared to the brian-scramblies most of the normies are currently somehow functioning with, you will be fine as powder. (Just for YOU, The Alan!) Or has your brian crumbled under the weight of all the bull excreta heaped...

Today is momentous!! David Weiss launches the Flat Earth Friend Finder on his Flat Earth Sun and Moon Zodiac App!! Flat babies, inbound!!! Dave pops in to give us the details, and later on, today once the app is updated, we will open it live on air during Have No Sphere to see all the...